All things were calm and quiet. I was in my PJ bottoms sipping coffee and thinking about how cold it was outside for chores.
The phone rang.

My neighbor's car wouldn't start even though she had put it on the charger. "Could I give the beasties a ride to school?"
Why sure. I grabbed the remote to the Subaru and piled into my heavy coveralls and boots. I wrapped up and headed out to scrape off the windshield.

The kids were really quite good and we got them to school only about 4 minutes late. Since I needed a couple of things we ran into Walmart and grabbed them. Then my nice neighbor took me out to breakfast!

We enjoyed chit chatting and having some friend time.

I laughed when she took off her 3 year old's jacket  and he had a PJ top on.
"What can be better than going out to eat in your PJ's!" I laughed.

Rich had plugged in both his truck and skid steer, he was going to go and get some large bales of hay. While he took a short nap, I decided to go fetch the trail camera from the woods and make a small cross country ski trip out of it. 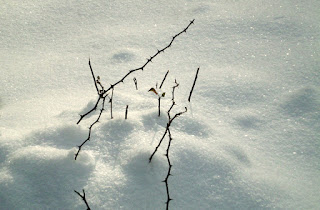 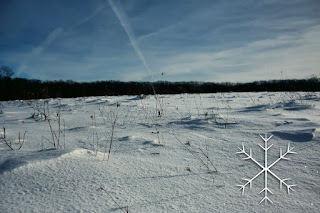 The sky was bright blue with trails from airplanes overhead. The snow glistened and I had to get a shot of the 'snow diamonds'. Every time I see them I think of my dad.
We called them snow diamonds when we would ski together. And it makes for a fond memory. 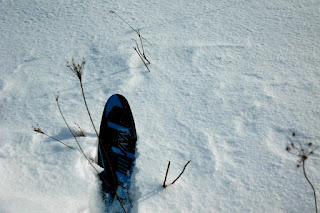 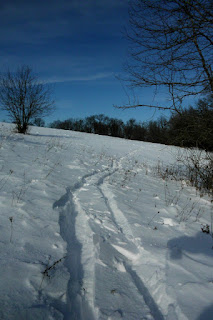 I like my skis that I now have. The boots are well insulated and the skis are slightly wider to break trail easier. It only took me about 20 minutes to ski around the meadow and break trail at the same time.

It was much more effortless than snow shoeing. However I can't ski in the woods and snow shoes shine there!

Now another Winter Storm is headed our way. No one is sure what the amount of snow will be.
However since I work the third shift, I decided to pack an overnight bag in case the roads were too wicked to travel on.

Oh, when Rich went to start the truck, it ran just fine. But it won't go anywhere. No hay hauling. It was a very bad time for the truck to break down.
But there we go. Bad things happen, but going out to a PJ breakfast and skiing sure made my day!