One of my goals in going to Wausau, aside from visiting with the grand kids, was to explore Rib Mountain State Park.


I like hills, I like rocks.  I like geology.
Rib Mountain, formerly called Rib Hill, is a four mile-long ridge of ancient rock dating back about 1.7 billion years. It is among the oldest geological features on earth. It is composed of very hard metamorphic rock called quartzite.
As early as 1893, the mountain was used in the manufacture of sandpaper. The Wausau Sandpaper Company was incorporated in 1900 and built a factory. In 1902, Wausau Quartz Company crushed the quartzite for grinding and polishing purposes. The two companies merged in 1905 to form Wausau Abrasives, which was purchased by Minnesota Mining and Manufacturing in 1929.
From Rib Mountain History.

Friday it stopped raining and we decided to go.  Lily and I got dressed for the weather and got to Rib Mountain quite early.  We were the only vehicle at the very end of the parking areas.
One of the first things we did was to climb the 60 foot tower and take a look around us. Lily took a shot with my FujiFilm camera and was able to see our motel. There is a pink circle around the Motel 8 sign.
The hotel was about 5 miles away, just so you can get a perspective on it. 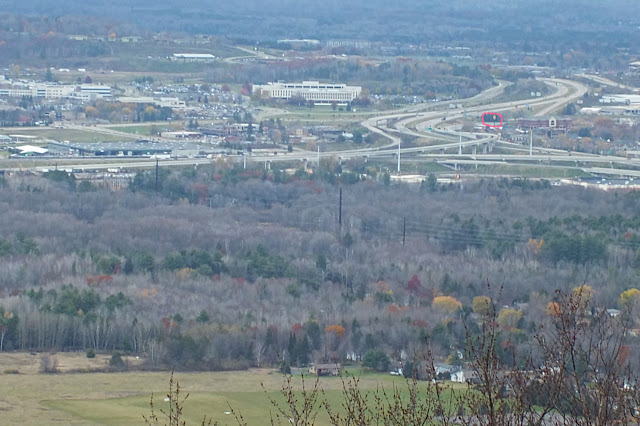 The view was really quite neat even with the heavily overcast skies. 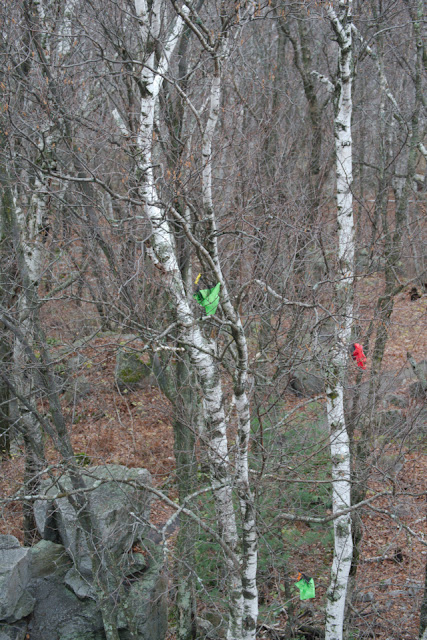 Parachute People flung off the tower at some point in time.

Lily's dad along with Elena and Sterling were to join us at the park.  Lily and I decided to go ahead and do a bit of exploring while we were waiting for them to come. 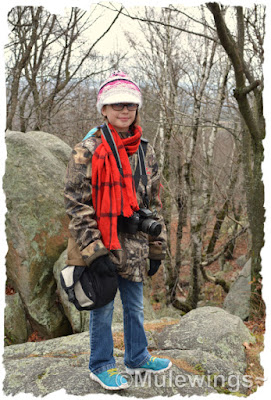 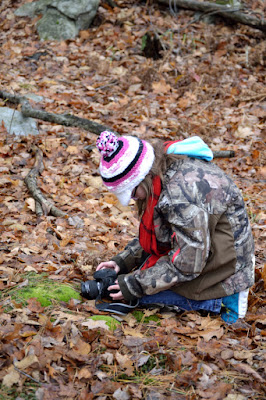 Lily got along just fine with my P&S FujiFilm camera.  We started along the Blue Trail which stayed close enough to the tower we climbed but not so far that we couldn't go back to the parking lot and meet up with her dad. 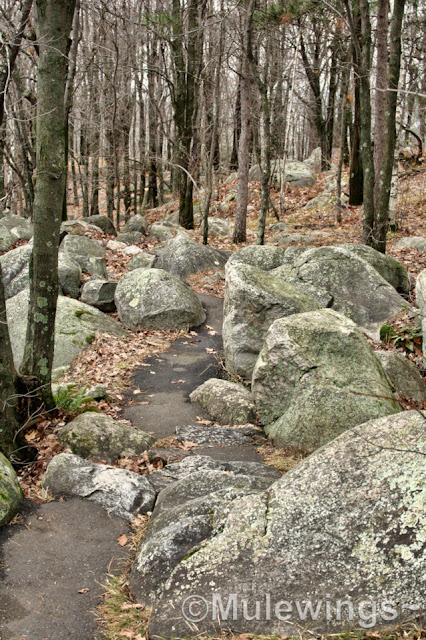 We swapped over to the Red Trail and circled back towards the Blue Trail.
What we had been looking for was the Grey trail which was my goal.  The grey trail would take us to the old quarry.  But we didn't find that trail until we were ready to leave. 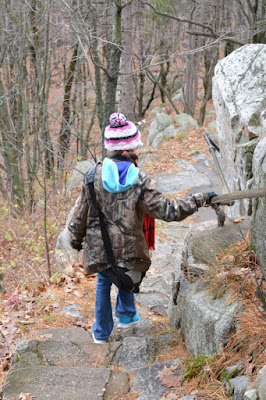 We actually didn't hike very far, we found so many interesting things to look at like fungi, moss, rocks and of course acorns.

Taking a ten year old hiking is a much different experience than taking an older person.  It is more fun to see things through a young person's eyes.

When we got to a stone staircase we decided to try some fun photography.
First the stairway. 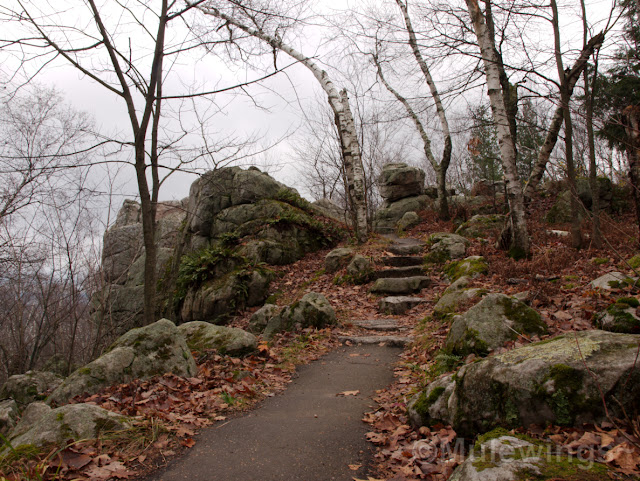 Lily wanted to see what it would look like in Infrared.  So I set it up. 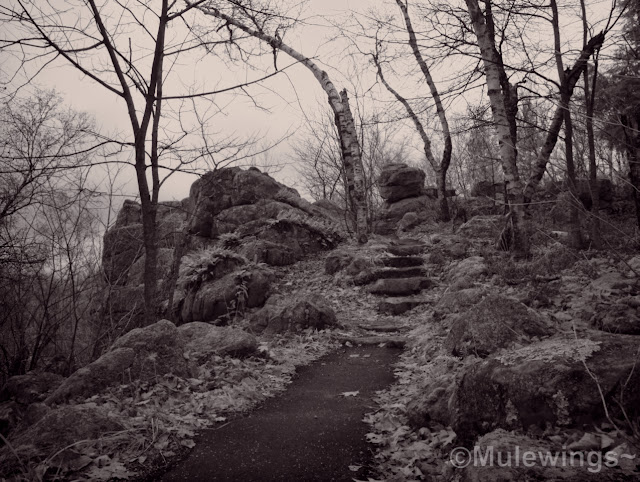 Then I asked her to be in the shot and to stand absolutely still.  She wanted a spooky weird shot. 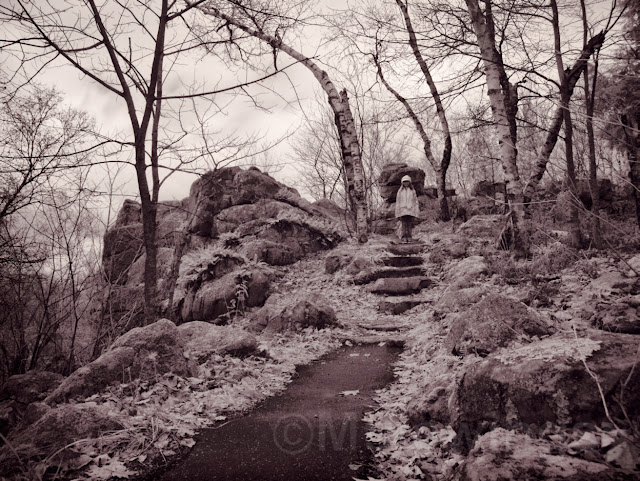 And there she was, a ghostly figure in a strange looking land.

We had so much fun with that, she wanted a IR photo of the two of us on a bench. 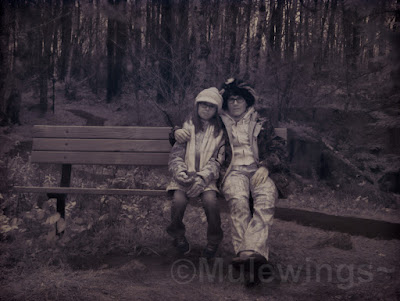 Our cam colors came out white and it was sort of spooky and creepy looking.

After exploring some mossy rocks and other things we headed back to the playground in hopes of meeting up with her dad. 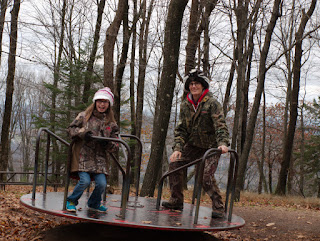 We played on the Merry go Round and then I set up a camera on a tripod and had some more fun with 'trick' photography. 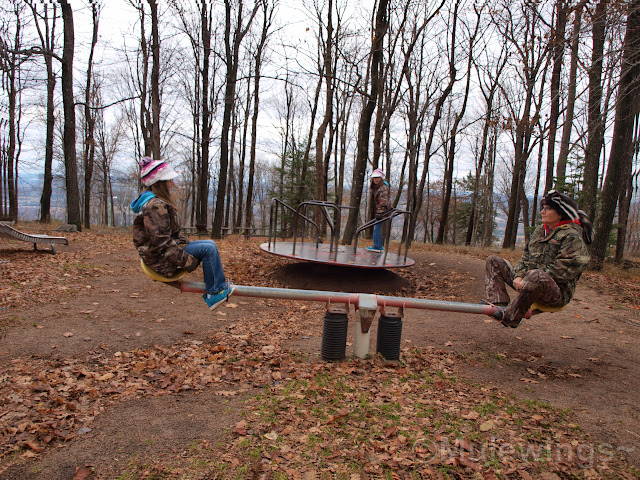 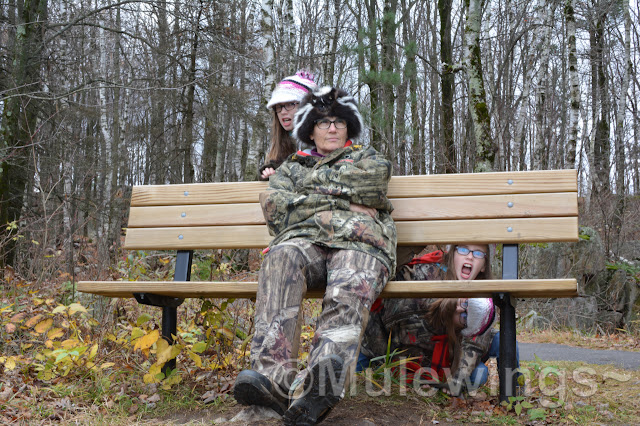 By 2:30 PM we decided to vacate the mountain and promised each other to come back and explore it again.