I know this has been a long drawn out effort for training a mule. Sundance is 10 yrs old now. So many things have interfered with getting her under saddle that the last 5 years have flown by.

She was supposed to be a project for Rich. I didn't want to train another mule. I'd worked with Badger as my very first full blown project in 1998. Sunshine in 2002 and Siera in 2006.

Anyway. Cancer, stroke, and other health issues took away Rich's desire to work with Sundance. I thought she was too wild and crazy at first to work with. However since she is here, I decided that she should be useful. So last year I started working with her. She made great progress and then...winter happened. The round pen got filled with large square bales for the winter and the training there stopped. I had good intentions of all sorts of work with her...but didn't.

Now we start up again. And the intense human contact has made an impression on all of the mules. 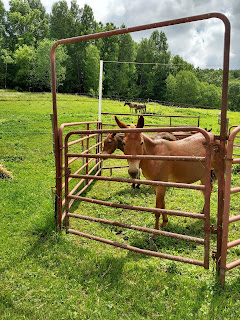 The red headed sisters always come to the gate and stare at me when they see me outside. Sunshine is the older of the two and has years of riding under her girth.
Sundance evidently loves the challenge and work. She will spot me anywhere and find me.

Even in the forest she hears my footsteps and comes on the gallop. She reminds me in a way of her half brother Badger. Her sister Sunshine is very similar. I've been blessed with some very fine mules in my life. Sundance may be one of those special ones and I may not have known it. 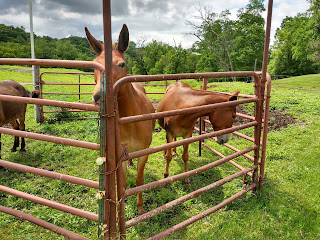 Here she is at the gate with her sister. Demanding to be noticed.

I made her wait though until I was ready.

In the round pen I just decided to start treating her like any mule I'd take riding.
No ground work first.
Brushing and picking the feet.

Blanket and saddle. This is the second time she has had a saddle on. She twitched her body when I brought it out but then stood still as I put it on her.
Bridle.
She really is not sure about having a snaffle bit in her mouth and kept inching backwards.
I did not have her tied, she was at Liberty and could have chosen to bolt away. However I stood quietly and spoke to her, explaining how I felt she needed to trust me on this.

She took the bit and let me adjust the straps. The bit and bridle really bugged the crap out of her. So I added a few jugs with rocks to her saddle and asked her to trot around me.
She shook her head and bunny hopped in protest. She went faster, slower, faster, then stopped and became a mule statue. 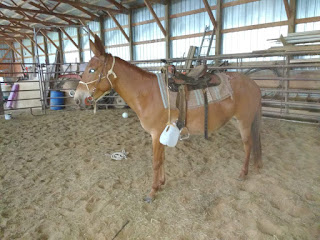 I put the crinkly dog food bag on her next and she listened to it as she walked around and then stood quietly again.

I attached reins and we worked on feeling the bit on one side and another and giving to the bit. It only took a few minutes for her to figure this out. I stopped as soon as she responded.
I then put a foot in her stirrup and laid across her, first on one side, then another.

A huge thunderstorm started moving in so I decided to end our session. I unsaddles her and did it as if she were a seasoned mule. She just stood quietly.

I'm looking forward to another session hopefully today.
One thing I have going for me, is that I am not like a paid trainer. I don't have a time limit on her work. I don't have to produce results in 30 days. I can take my time and do it how I like.

I will be moving the herd back to the forest so they have lots of shade as the weather is turning very hot and humid.

I'm pleased with Sundance's progress. They say you need to train them very young. I'm thinking that Sundance is more like her sister and half brother Badger. They needed time for their mature brains to kick in and accept things.
This work would not have gone well when Sundance was two or even five years old.

I guess things happen for a reason.