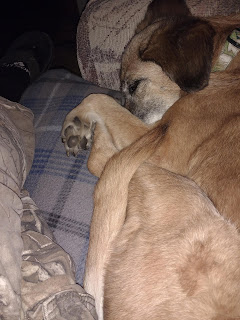 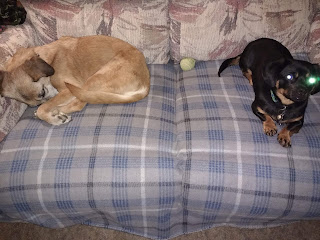 A horrible shot of Charlie, but evidence that now the two dogs are tolerant of each other.
Charlie was a bit put out by Teslin taking over that side of the couch. He preferred it when she would lay in her cozy little bed or go upstairs. She has quit going upstairs now and prefers our company.

She has decided that Charlie's food is better and has gained a pretty good appetite. Teslin will come and stare at me when she wants dry food. She has free feed food in her own bowl. That is fine with me. When Miss Picky eater is hungry and she gets food.
Both dogs went with me on a long walk yesterday. Mistake. Don't let Tes off leash, she has a way of deciding to take her own way and wander. My son said she isn't deaf, but she is when I call her.
So she was put on a leash and our hike was rerouted towards home. Coming through the meadow ... I had to carry Charlie. The grasses were so thick and hip tall on me.
Note to self. Stay out of the tall stuff with the dogs.

I took an afternoon to start to clean all of the saddles and gear. I sat on the porch Sunday with the dogs and cleaned 5 saddles and oiled britchens.
After pulling a tire off the zero turn mower, I took it in for repairs and then spent the evening trying another first.

Rich has always roached our mules' manes. So I decided to use the clippers this year as I'd used scissors last year with okay results, but it took forever. 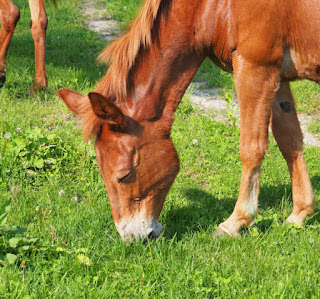 So there is Sunshine with her Shaggy Messy mane. 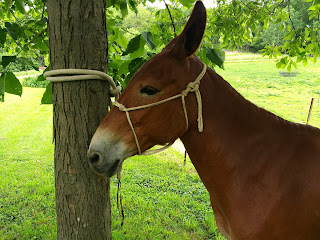 Clipped! And I did her ears too. She looks much better. I used an old set of clippers on her. I asked Rich why he had quit using them. He said something about not cutting or some such thing. I thought I'd find it's manual and well...

Holy cow! I fixed them, cleaned the blades, oiled it, and then used the clippers on Sunshine! I even watched videos on YouTube to see if there was an easier way to clip. I followed a video and it worked out better.

Siera was a cakewalk. I used the large clippers on her. I'd taken them apart and cleaned and oiled them also. See? I am learning! 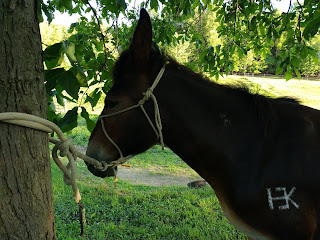 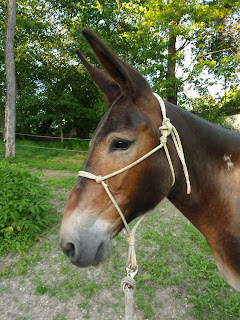 Last night I caught up the youngest mule. Rich said she hated clippers. I put her on the tree and turned on the quiet clippers. Sundance lost her mind. I know Rich had twitched her in the past to do it. But I am in no hurry. I left Sundance tied to the 'Naughty Tree' while I put everything away.
I was going to have to calm her down and we'd take our time regarding clipping.

Sundance and I went to the round pen and worked for a while. She decided that the goat in his pen was a mule-eating transmorgifying monster of some sort. Eventually she walked over and stared at Sven who just talked to her through his pen.

Sundance thought he was okay to look at. But I was still the enemy and I was NOT going to touch her at all. This was my own fault for not properly dealing with her clipper issue. But at the same time, it opens up a door for us to work together. She was doing so well last fall and it fell apart last night.

I worked with her and as soon as she turned, dropped her head, and walked to me with a kind look in her eye...I praised her and then took her back to the pasture after a short time grazing in the yard.
I let her loose in the pasture and she decided to glue herself to me.

I think I was forgiven. Her sister, Sunshine thought she'd like to get caught again.

I think I am glad I didn't do a vegetable garden this year. I'm hoping to spend a lot of time working with Sundance. My goal is to have her under saddle this summer at some point.

Here is where we were last year when I had to end our lessons in the round pen. 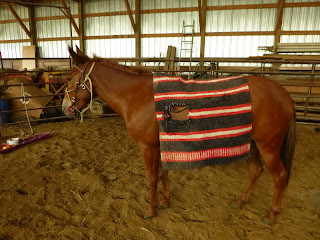 ~~ This is where the large square hay bales are stored for the winter. I dislike having to use this space but hopefully I'll work something out soon enough.