A bit of Infrared Photography 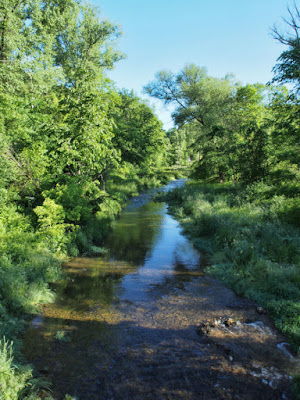 I went to a favorite spot of mine where I can stand on a closed bridge and view the stream below. I have to admit that the lighting was not really fantastic for taking photographs.

But that is why I enjoy Infrared. I'd brought along my Olympus OMD EM 5 which is an older camera to try out some filters. Infrared can be quite complicated. A converted camera is the best but I'm still a bit hesitant to take the old Oly and send it in for conversion.
If you want to read about it here is a link by LifePixel. Converting your camera...

I thought I'd compare my tiny pocket camera that I'd purchased from KolariVision to a non converted camera with just filters.

So I put the 720nm filter on the Oly and set it up on a tripod. Using this filter increases the exposure times greatly.
With the white balance ... not correctly done in camera... I learned more about that later, the shot came out like this: 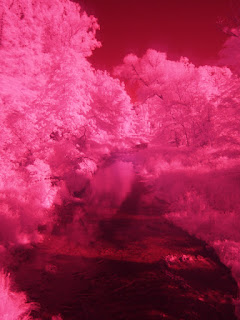 Eww! Nasty reds and pinks.
But I had hope. I took a lot of shots.
I dropped it into the Olympus Program called workspace and went looking for a correction on the white balance. 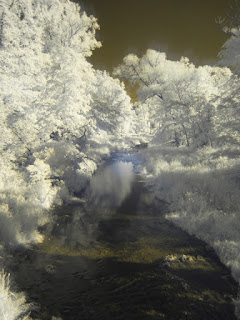 Well, this was neater! Odd colored sky, off white foliage, blue reflection with a burnt sky and stream. I noted here that the wind blowing had left the tree tops with a blur. That is okay, I was experimenting.

I did some channel swapping for some 'false' color and ...

This really did appeal to me. Now everything looked like it was from another world!  The reflections were cyan and there was some pink from...who knows where. I could colorize it to my whim or leave it. Some of the details are a bit fuzzy as it was a 15 second shot and the wind blew leaves and grasses. But that was okay.

Then I thought to see how it would appear in black and white. 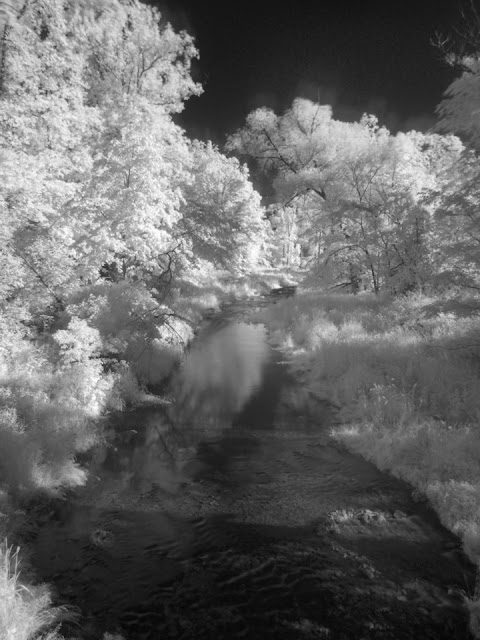 Oh yes. Now this I really like a lot. I liked it better than any of the other versions including the nice color shot that is very ho hum.

Then I took out the converted Canon ELPH which is a pocket camera. I stuck the 720nm filter on it and... 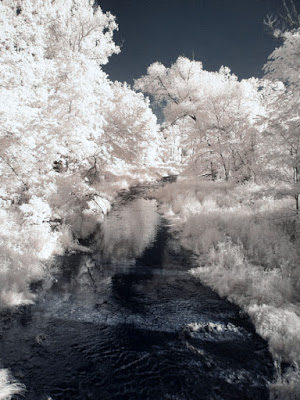 Well, I think the converted camera speaks for itself.

my favorite shot of the morning taken with that little point and shoot camera.... 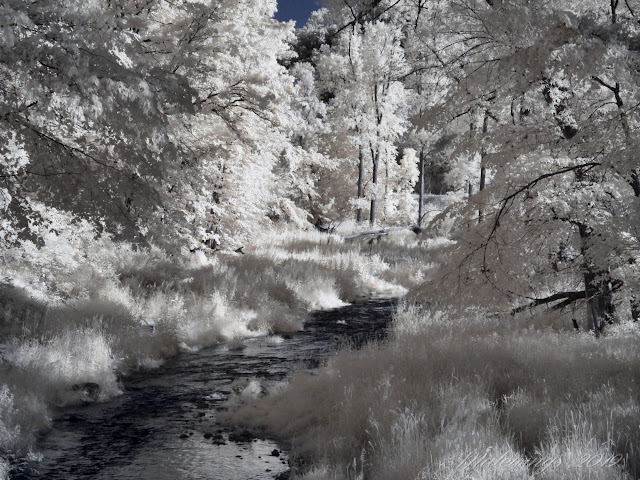 I think hands down, a conversion is best.

Now to go ahead and send the camera in!

That will take some more consideration.