Once upon a time about 7 years ago, on November 19th, 2010 to be exact my husband decided to put up one of those neat fancy cool tree stand thingies.

It is called a Tree Stand.
I wrote about how I thought a hateful woman had invented the Tree Stand to simply get rid of her husband easily in a hunting misfortune. Misfortune my ass.
They are built to kill you while putting them up.

This new fangled Tree Stand was brought by our good friends from K-town. It is a 2 person Tree Stand.
I am sorry but I have a hard time dealing with a one person stand yet alone trusting my weight and one other person's to a TWO person Tree Stand. Add deer rifles and you get another level of excitement.

First you unpack the thing and put most of it together on the ground. Haul it out with a skid steer and a 4 wheeler. Oh, and don't forget an audience. 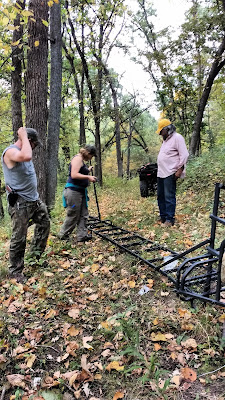 Poke around with the pieces for a bit and see where in the heck they do fit. Scratch your head and swat at the mosquitoes that have decided to come and watch - no doubt they were texting their other bug friends to come and watch the free show.

After one failed attempt to get it up into the tree. Threaten to shoot it. 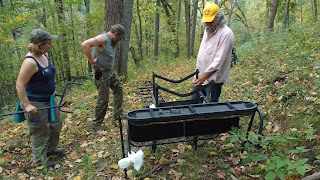 Okay the guy in camo is not going to shoot anything. It just looked like it when I took the shot with my cell phone.
Here we are all pondering the next step.

Next step. Climb the tree with a tree climbing thingy and pull it up with a rope. 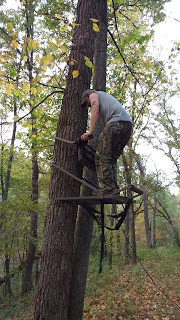 Sounds great! I was astounded. Sort of. I never saw tree climbing thing like this. 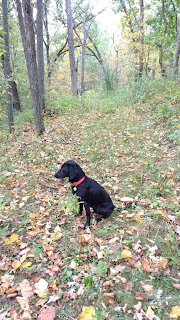 As the light kept fading and it kept getting darker, things kept on track. There was a lot of sweating but no cursing as the kids had come up from the creek to join in the adventure too. 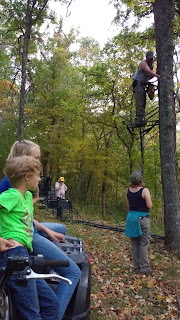 I stayed out of the way as I'd be absolutely no help what-so-ever.

After some tense moments the tree stand was hauled upright and sort of held in place as my husband held the stand while the other guy climbed up to secure it.

Now there were two wives biting their nails and getting a bit worked up. Both of us were pleading with the hard headed men folk to wait until daylight to finish the job!
My husband was pretty quiet during most of this as he was the guy on the ground holding the extremely flimsy ladder that was not attached to anything while the other male climbed up and strapped the seat to the tree.

I kept checking to see if I had any 'bars' on my cell phone. Nope. In order to call 911 I'd have to sprint to the top of the ridge. I took a few deep breaths and hoped the Tree Stand Gods would allow this to be erected.
I even thought of what sort of sacrifices I could make to said Tree Stand Gods to make sure the job finished safely ... in the twilight. 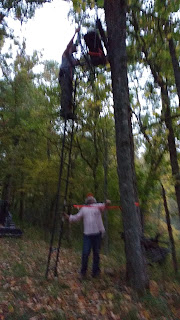 No sacrifices were made and surprisingly the guys decided it was too dark to continue, but the Two Person Tree Stand was now anchored.

And we headed back towards the house with the lights of the skid steer to guide us. 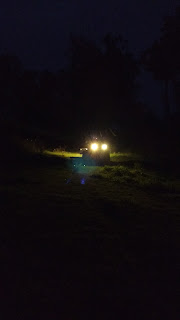 Yes indeed. The Sequel to putting up the second tree stand was almost as tense as the first one many years ago. But with the kids there the cussing was held to a minimum. And we no longer had the donkey contingency to watch us. However I'm sure the Dexter Cattle would have loved to give their opinion on the matter.

My friends went back early the next morning before they left and finished up securing the Tree Stand.

On Monday I went back to scout the area out. Hmmm.

Well bust my britches.
The view from the top of the stand was incredible. 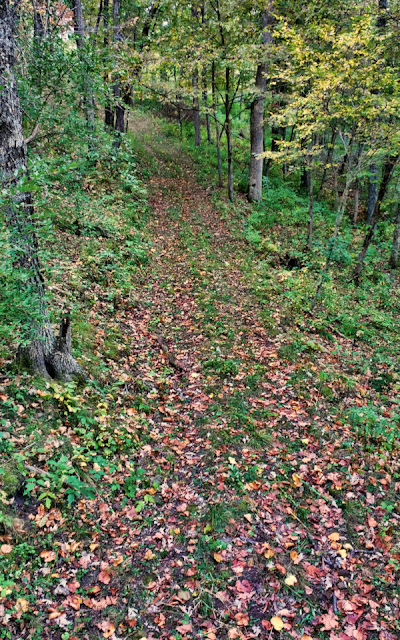 And I didn't feel like I'd fall down either. I mulled things over and then took another photo down the ridge road in the other direction.
Well, hot diggity dog! 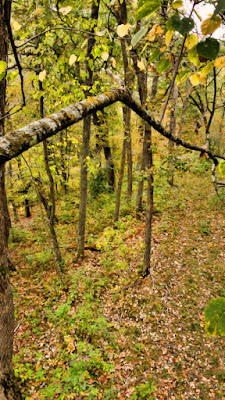 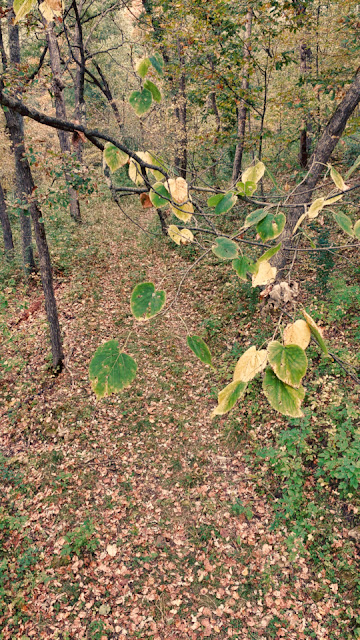 
Okay. Well maybe it wouldn't be such a bad thing after all.