Morris has had some odd behaviors these past few weeks. He has walked into the door before I opened it. He seems lost if I get out of his view and then can't always seem to find me. He seems as though he is quite lost some days. However most of the time if I got out a leash he seemed bright and attentive.
This past week we had record heat and humidity. Morris and I chose to opt out of walking to the bus stop.
We've dealt with all of his funny little mishaps of missing a stair, or growling at plants that he thought shouldn't be there...with a bit of humor. After all. He is aging.

Saturday was one of those normal days except it was supposed to be unbearably hot and humid in our neck of the woods.

I scurried around in the morning before things go too hot and picked cherry tomatoes for our summer salad I planned on making later. 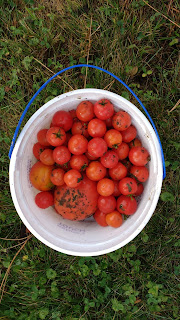 I found a clean one and munched on it while in the garden. They were warm and delicious.
Morris the ever curious old dog came up and tried to eat one. I was sure he wouldn't like it so I bit a small one in pieces and let him smell in on my fingers. He snatched it and gobbled it down.

He then grabbed another split one from the ground and ate it. I shooed him out of the garden and walked back to the house. I wondered if tomatoes bothered dogs.

Well I went inside the house and commenced to making our pasta salad for eating later.

My brother and his son are coming to visit on Tuesday so my mind was on salads, meals, schedules, ...OT on Monday, the VA on Tuesday, ...changing the sheets from my last round of visitors, tidying up the porch, ...
Oh.
I peered at the yard and told Rich that it was too hot to mow. Just leave the yard alone. It didn't need to be picture perfect for my brother.
I think the last time my brother came here, it was 2002. Yes. It was. My brother brought my father for one of the last WI visits.
My dog Xena had just died from either eating coco bean mulch or poison. We never did figure out if she got into a rat that was poisoned or ate the mulch.
Rich had been admitted to the hospital and I'd picked him up just before their arrival.

Around 3pm Morris fell off the couch. I saw it and then saw the stress in his eyes and in his body language. Something was horribly wrong. His back was hunched, his eyes were dull, and he walked with a wobble.

He tried to walk to the door and I let him out. He wobbled off the porch and squatted...squirting me with diarrhea. Oh sh-t. Oh sh-t. No. No!
He finished and wobbled back towards the door. I cleaned up the porch with a little bucket of water and washed my bare feet.

Hmm.
Inside Morris shadowed me as well as he could, he lifted one paw onto my pant leg and stared dull eyed at me while he shuddered.
I picked him up and let him snuggle in my lap. 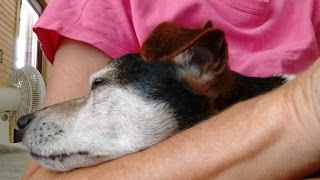 I started to research his 'symptoms' and wasn't find too much in results. Not until much later did I happen on a site that sort of sounded like what Morris was going through. However this wasn't until after midnight.

Years ago, I bought a veterinarian's stethoscope and learned how to use it. It helped when Badger was so sick and when anything happens to an animal on the farm and the vet comes, I can save them some time with giving them vitals.

Morris's vitals were as follows. Heart rate: Rapid but strong. Within the high normal for him.
Respiration was in the high range when he seemed to have a cramp, but otherwise withing normal range.
Lungs clear. Rectal temperature within the his normal range. 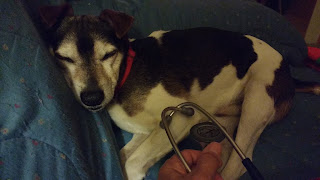 It seemed he had a gastric upset of sorts. He confirmed this by throwing up. I could see chunks of the small tomato in it and then wiped it up. Tomatoes didn't seem to be a huge issue for dogs unless they ate green ones or others in large volumes. He had done neither of those.

Rich was concerned too. Until we went to bed Rich took turns taking Morris out to the bathroom. When it got dark, I put his pet-lite [a small medallion that lights up with an LED light] so I could watch him closer. I followed him around as he peed and did his business.

By 10 am, he had settled in for a long nap on the couch. He slept and slept. 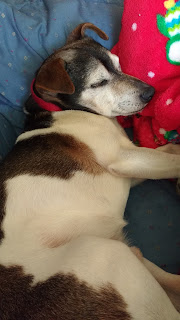 I'd called a few vet offices and being a Sunday I got an answering machine. "Hello, you have reached - name of office - our hours of operation are...."

One office was open and would take emergencies. To walk in the door it would cost $150 and they were 90 minutes away.
Morris was showing improvement so we decided to wait and let him rest.

He did exactly that for the rest of the day. He would get up and walk quietly to the door and stare at you with those soulful eyes.
I fed him the rest of the chicken breast which he skillfully picked out of the rice and took him out.
Afterwards he climbed up on the couch and laid down.

I figured to try and sleep in bed.
About 4am I heard the sound of Morris walking into the bedroom. I cleared my bleary eyes and grabbed my glasses and a flashlight.
I followed Morris around the yard as he seemed to try very hard to defecate. He strained and strained.
I gave him the last of the small bits of the chicken I had and he seemed to want more. He ate some left over cooked burger crumbles and stared at me when I didn't give him any more. I figured until we were able to see our veterinarian, I would err on the side of caution.

After a few more trips outside with nothing but effort, he ambled in slowly and drank some more water. He fell asleep on the floor next to the couch. This morning he won't jump onto the couch.

I have a 12:45 Occupational Therapy appointment and am trying to figure out how to take him to town. Today will be another hot and humid day. No way to leave him in a crate while I do therapy. I'll check with the vet's office and see if we can't work something out.

I feel like I jinxed myself by going through Morris's bucket list. Or perhaps I was neglectful in some way by allowing him to taste the tiny cherry tomato. All I know is that I am sick at heart.
I am not ashamed to admit that I spent most of Saturday night with tears in my eyes.

I rarely cry about anything. I don't cry at funerals. I don't get over emotional when something awful happens. And I didn't get teary eyed during any of Rich's medical emergencies. I've always been known for my steely resolve.
Except when it come to animals. I have no way of keeping my emotions in check.