What should we do today?

"What do you want to do?" I asked hubby as he sat at the kitchen window and stared out at the cloudy dismal looking day.

"Is it going to clear up?" he asked. I checked the weather. 40% chance of showers on and off during he day. I told him that.

"Is it going to clear up?" he asked again.

I shrugged and then replied, "Well what are you thinking?"

"Well, if it is going to clear up, then we could try Runge Hollow and go fishing." He stated.
Rich had fishing on his mind. Funny how when a thought these days comes into his head, it gets stuck and rumbles around repeatedly over and over. No fault of his though, the though rattles about until we address it in one way or another.

"We have rain gear," I reminded him, "some pretty good rain gear. Why don't we just grab it and go? We can pick up worms on the way through town."

He stared out the window for a bit without seeing anything. Once that look concerned me as he would be having obtrusive PTSD thoughts of combat long ago.
Now after the stroke he had told me, things are just blank. Nothing is there.
He seems more soft and not as harsh around the emotional edges.

I got up from the table and grabbed his rain gear and then directed him step by step on items we needed. On days like this, he needed more than the usual guidance.
In no time at all we were headed towards Runge Hollow. 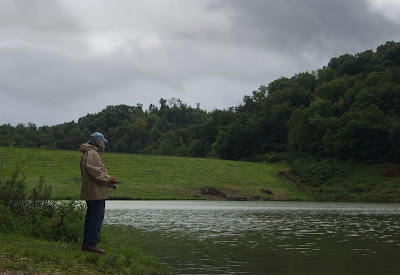 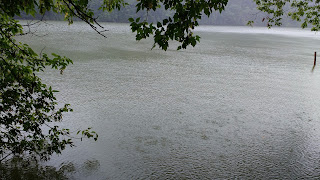 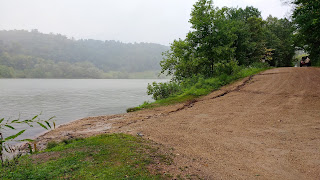 And it did rain off and on.
You can't see it in these shots, but when we had 6 or more inches in a 24 hour period in July the water rose in this man made lake up at least 5 feet, the leaves on the trees on the opposite edge of the lake had mud on them.

Runge Hollow Dam holds back some of the Bad Axe River and keeps it from flooding out those downstream from it. Our county has a series of man made lakes and dams that are flood control projects.

We fished the rest of the day and enjoyed the peace and quiet of having the place all to ourselves. And yes, we got enough to have a nice supper on Friday night. 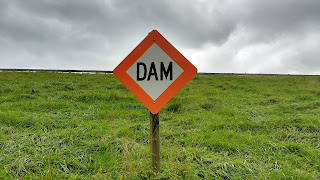 The other side of the Dam... 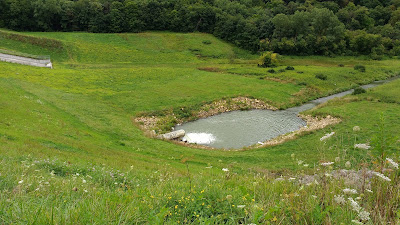 Our fishing spot for most of the afternoon. 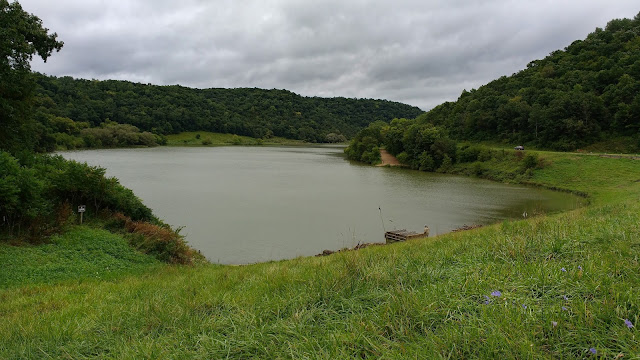 If you look hard you can see Rich down next to the intake. There is a vehicle in the upper left driving up County Road Y which is on top of the dam. 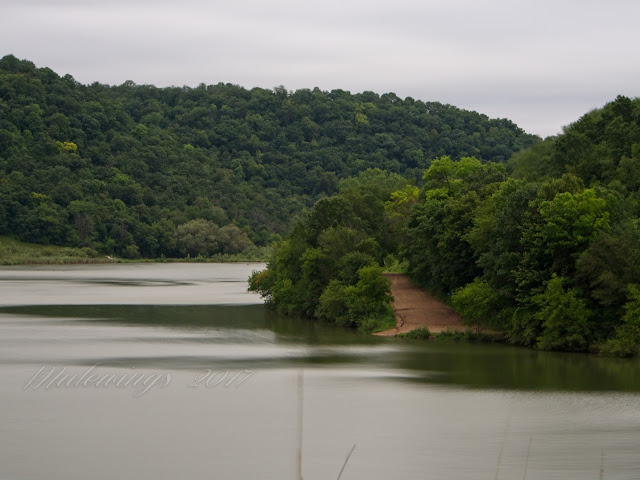 A view across from the dam where the boat dock used to be along with the wheel chair access. I believe they were washed away in the flood last September of 2016.

I learned that just because it is raining, it doesn't mean you can't go fishing.
I recall something my Grandfather Fred used to say.

"It's raining outside, let's have a picnic!"

It never really made sense. But now I can say..."It's raining outside! Let's Go Fishing!"