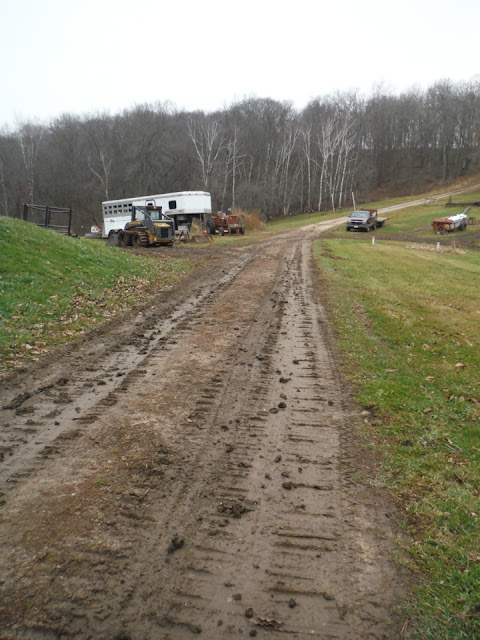 El Nino hasn't been kind to us.  Sure the weather is milder and wetter, but we are swimming in mud and goo.

According to our farrier most of the equine he has had to trim have been in the sticky muck.  As he then said, "Hey, I chose this job."

Before he arrived we got each of the donkeys and gave their feet a bath and then put them in the round pen picking them out so our farrier wouldn't have to. 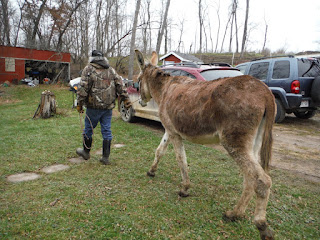 Not all of the donks liked getting their feet washed, but we got it done anyway. 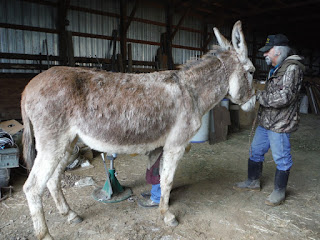 Two hours later when Dewey showed up he was pleasantly surprised and very happy that we'd taken care and time to wash and clean the feet so he wasn't handling gooey mud caked hooves.

After Dewey finished, we talked about Siera and her frog issues on her one foot. We decided to see how trimming and regular 'in hand' exercise would work before we decided to go with special shoes.

I love Siera and she is a great ride.  Everyday I get her out, clean her up and either hand walk her up the gravel road or lunge her a bit in the round pen.  She enjoys the attention and the work so much that she trots to the gate every time I am in the yard.

Lil' Richard had his second training session.  In the first one, he was full of nonsense.  I put a rope halter on him for this session and we lunged on a line.
Between the last session and this session, he must have decided that he was going to be a smart pony and work very intelligently. 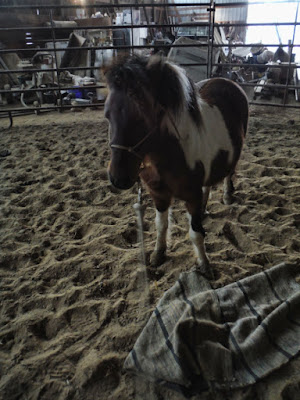 He took to this like candy.  He even took on the ever fearful blanket.  Lil' Richard gave it the stink eye, then walked over it after only a few minutes.
I put it on him and he smelled it and stared at it and then promptly ignored it. 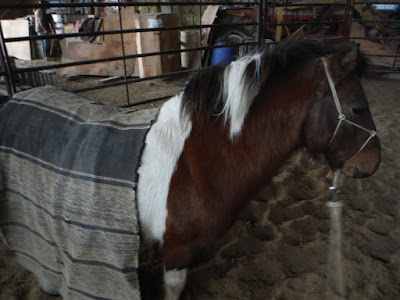 He is a very quick study.

At the end of his session, I spent a bit of time with grooming.  He still has burrs in his forelock and in his tail from his late summer grazing.  He stands like a statue when I work on these.
Of course I've done this for years with him, so I didn't expect anything else.

He may make a great little mount after all.  He won't be for anyone who weighs over approximately 115 lbs, but that is fine because he'll work for me to get little short rides in.

My feet will only be about 3 inches off the ground.  My inseam is 3 inches less than his height.

I'm looking at an older donkey to start under saddle and with this mild winter I may have time to do that also.

So I guess El Nino may have some good things after all.

I look across the pastures and see Pedro, one of my favorite not trained mules. I'd started him quite a while ago but had that ended when I had to have multiple shoulder and elbow surgeries years ago.