I need a name 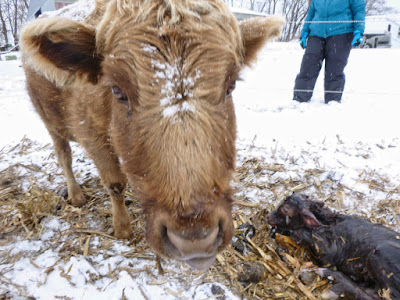 During our family Christmas Meal I noticed Stella the escape artist getting harassed by Belle. Stella was laying down in the fodder we had out and wasn't getting up which was very unusual.
I jumped up from the table and hurried to get my coveralls on. It is amazing how fast I can throw on those insulated coveralls.
LOVE my coveralls!

Ariel was close behind me, she grabbed my farm coat and out the door we went sort of leaving everyone at the table with my parting words "Something is wrong with Stella...!"
Actually I was not believing my eyes. I think Stella was calving. She shouldn't have been, but...we didn't move her out of the pen where we had a young bull until late spring...so...

Oh.
I stepped through the hot wires and Stella stood up and sort of whirled. Out slid a calf. Stella stepped away and I bent down to the calf, pulled off my gloves and cleaned out his nose and throat. I wished I could have seen Ariel's expression although I will bet she watched intently.
My hands were full of the calf's smell and I gently put them up to Stella who smelled them and made a soft guttural sound. She followed my hands back to the calf and she started to clean him. 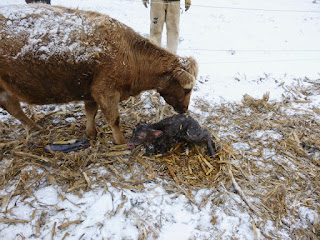 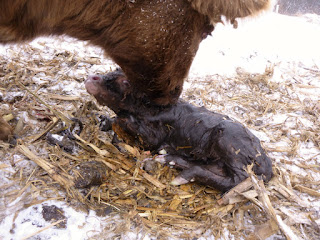 I sent Ariel to the house to tell 'Grandpa' that we needed to take Stella and the calf to the shed.
By now everyone dressed. Rich and his daughter set up a pen in the shed while Ariel kept the other Dexters at bay with sorting sticks. I ran into the house and tracked snow and fodder over the floor to grab some old towels.

Stella will generally follow me or allow me to push her where ever I want her to go. She is the not a very large Dexter, so I formulated a plan. I'd pick up the calf and she'd follow the calf and I into the pen in the shed.

Rich said the calf would probably not survive in this cold. I said that I'd sure like to give it a whirl. I could not abandon the thought of trying to make this little guy make it.

It was quite the sight I think. I was crouched holding a wet calf wrapped in a towel in front of Stella's nose. She'd lick the calf and I'd crab walk sideways away from her. She'd follow and make guttural noises. Behind me, Rich, Ariel, and Steph all kept Stella on track through the yard and up towards the shed.

We got to the driveway and Stella stood stock still. She had to pee and no one was making this new mom move until she was darned good and ready. It made us all laugh. We even talked to Stella as if she were a person, asking her if she was done yet and did she have any other thoughts?

We got her into the pen with no problems. We put down shavings and hay. Stella seemed starved and ignored the calf. 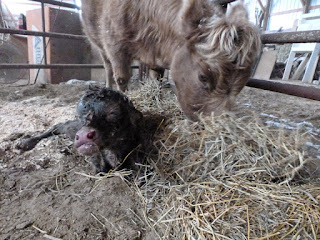 I went in the house to get on some dry coveralls and more towels.
My mother in law asked me how I got so wet. I explained I was calf-slimed and laughed.
Pretty soon everyone else came in too. Rich said Stella was ignoring the calf and he'd tried to get it up to nurse with no success, that Stella kicked at the calf.

Ariel asked me what we should do. I told her that personally, if it were up to me, I'd get milk replacer and bring the calf in the house. She seemed to think that was a good idea. I took the towels and rubbed the calf dry.
Ariel watched as I pulled the calf close into my lap and hugged him tightly. I willed him to live and to get warmth from me holding him so tight. He shivered and seemed to push into my body.
I don't think that Ariel saw my tears. Perhaps she did. My heart has an extreme soft spot for animals. I hugged him tightly before setting him down in the bedding.

I explained that had we known, we would have had a box stall put together and a heat lamp. The last time I'd had a calf born in this time of year, it hadn't made it. Annie had come to us with calf and we didn't know it. We nearly lost Annie because she was technically too young to have been bred.
Photo from January of 2012. Saving Annie 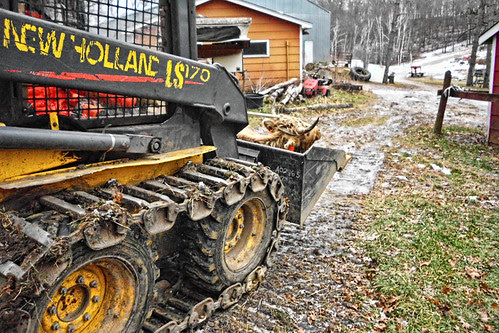 We did save Annie. I even hand milked her much to her disdain and had tried to save her calf. However both had been so chilled that we lost the calf.

Of course the conversation turned to cattle and the calf...and Stella. I mused that if Stella's calf was half as sweet as she was, he'd make a beautiful steer to have around for petting. It felt bittersweet to talk like that. I wanted the Calf to be fine.

As the company gathered to leave, Ariel went back out to say goodbye to Stella. She was all set to find a dead calf.

She came in the door and her glasses fogged up.
"He's up and walking around!"
Everyone went out to look and they came back with the same conclusion. The calf was up and moving around.

After they left, Rich said he was going to bed. The day wore him out.
The Kenosha Gang folks called...Daryl and Amanda and we talked about our plans for the weekend.

They said they'd bring a heater and we could modify the stall to prevent them from getting too cold during the upcoming weekend sub zero cold snap.

I hung up with a bit of hope in my heart and grabbed my fresh coveralls from the dryer. They were warm.
Snap!
Cha-Ching!
I grabbed the towels I'd just dried and stuck them back in the dryer while I dressed. I had a plan for the next 24 hours. 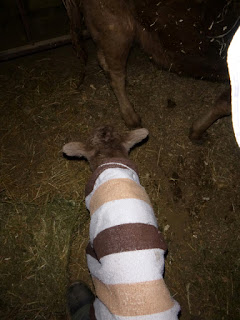 Heated towels every two hours!
The calf really responded well to that and he even scooted around the makeshift stall while I cleaned up mom poop.

Stella had cleaned up her hay so I fed her more and gave her fresh water. 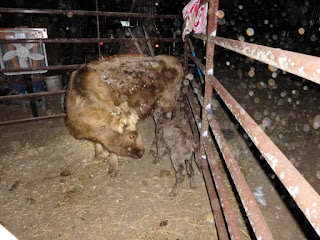 This was taken at midnight.

I didn't awaken at 2am. At 5am I ran out to the calf laying in a pile of hay and shavings giving me the classic Stella Look. 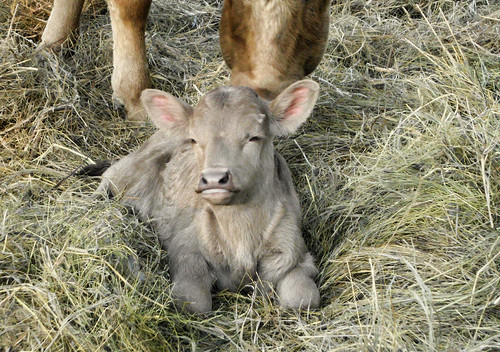 So it looks like this Dexter Weebull is strong this morning. I have help to make things even better coming this evening.
I am hopeful enough to actually think of giving him a name.

I had a thought:

A friend on Facebook said he should be called Zero for the subzero temps.

Let's hear it!
Posted by Val Ewing at 7:36 AM
Labels: After Christmas, American Dexter Cattle, calf, I need a name, surprise, The Incredible Stella, unexpected