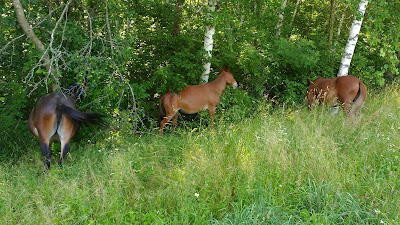 This is a very unflattering photo of Siera's rear end. As you can see none of these animals are suffering from any kind of malnutrition. They are all glossy and a bit 'round'.

I pulled them out of the meadow and tied them up while I figured out who we were going to put in the winter pasture. The grand kids were coming and they had .... well... they wanted to ride.

I understand deeply what the urge to ride and the want to ride is like. I of course just wrote about being a kid and aching to ride. I don't want the kids who visit here to have to feel that ache.

However, the kids who want to ride can't just walk on the place and jump on and go.
Nope.
Siera, Fred, and Sunshine are really great mules. They are calm and patient. Well, after yesterday, I think Siera is the calmest one I have.
Don't get me wrong. Siera is calm because she is so lazy!
After Ariel and Dennis did a refresher 'class' with Fred in the round pen, I saddled Siera and brought her in.

While I talked about Siera and held her reins, she stood like some Zen Statue. Siera is 14.2. That means she is 56" tall. Fred is 52" or perhaps 53" tall. You may think that those few inches wouldn't be an issue. That is until you try to get your foot in the stirrup that is now 4" higher than the one you are used to!

Siera just stood there while the kids practiced. She just sighed and waited. She didn't try to walk away or move. Siera is one of those mules that is just happy when she has a human with her.

The kids then rode her around the round pen a bit.
We were ready for the next step.

I put Sunshine in the pen and the two kids mounted up and started riding. At first I told them specific things. Then I realized that they would learn more by simply just going about the field without me nagging them on this or that. 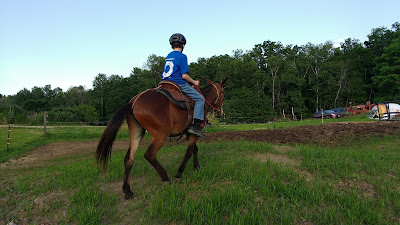 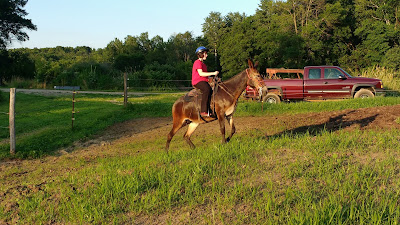 Siera didn't want to 'work' for Ariel and I didn't realize why. Rich watched from inside the house and pointed out some things.

I've pretty much been Siera's only rider since she was started under saddle. My body language is very different than Ariel's on top of Siera.
When I settle back in the saddle and simply lift my hands, it is a silent cue for Siera to stop.

Mostly so I can take a photo. 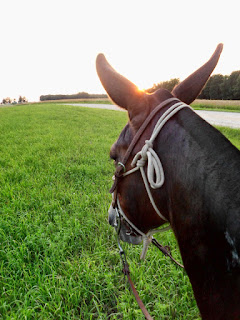 Siera halts and waits until I sit forward and lightly cluck to her while tapping her side with my foot.

Rich saw the difference in how we rode. Siera was taking a cue from Ariel to stop, stop, stop.
When the kids swapped riders Siera moved for Dennis, but the way he sits the saddle is different.
Fred moved for Ariel and did what she asked.

I think Ariel got a bit frustrated with Siera and I could see why. She is the ultimate Lazy Gal. However, she also does not spook. 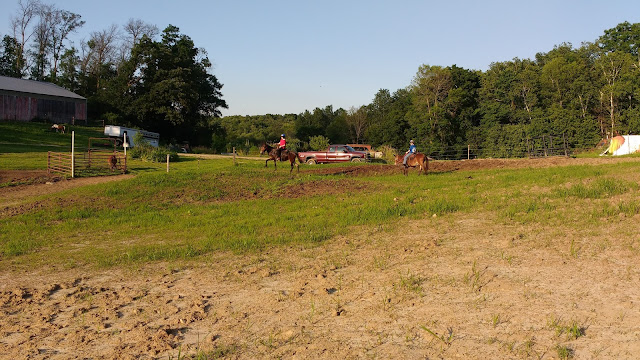 After we put away the mules, there was some daylight left. 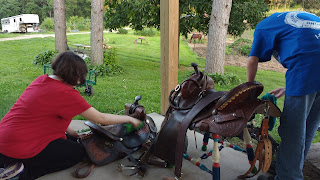 Those who ride, must take care of their equipment. My saddles were dusty and dirty from last year and I hadn't taken the time to clean things.
I had two sort of willing folks who did a rather nice job on the porch.

The kids want to get up early and help with chores so they can start riding while it is still cool out.
Today I will saddle Sunshine up and join them.

We may even decorate the mules up and ride them up the hill past the neighbors, and out to the Y in the road. A mule parade?
Why not?

There is nothing better in life than a good mule [or horse] and a kid.