Time for a Toy Story

Let me begin by saying that this is an on and off again thing I have fun doing with my Grand daughter Ariel.  The Toy Story that revolves around the little toy deer that I have called Doe. Doe always takes off in crazy directions and does insane things, like trying to live in an ice cave.  Or trying to live in a parking lot.  Or wandering off and getting lost.

I carry Doe in my camera bag. And sometimes I carry other toys too and I always look for someplace interesting to photograph them and then make a short photo story of it.

Well the other day, I added a toy to my collection.

Doe wandered off down the creek.  Her friend Bo that she met during hunting season had gone with Stinky to find another home for her. They said she needed a nice place to stay come early this Spring.
She didn't know why, she preferred wandering much better than just finding a home. 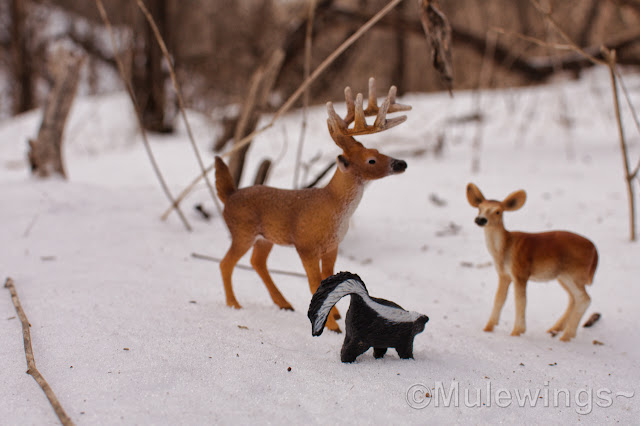 Bo and Stinky tell Doe they will look for a new home for her.

Well, she was going to show them!  She just wanted to take a walk by herself. She liked the creek in any season, it was always so interesting.

Wait!
What did she hear?  Was that growling?

Doe looked up the rock wall where an ice cave had been forming.
What on earth was that??? 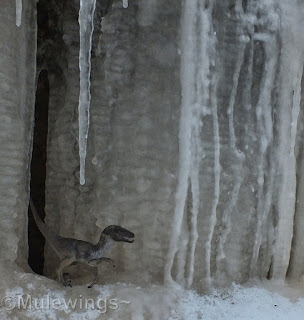 Doe ran up to it and introduced herself.
[Oh what would Bo and Stinky think right now?]

The creature had huge teeth and tiny eyes and funny looking hooves.  He said he was a Dinosaur and a Velociraptor.
Doe certainly didn't know what that was but she was hungry so she asked the Dinosaur if he was hungry.

Doe said she knew of a nice place where they could 'do' lunch.

And off they went. 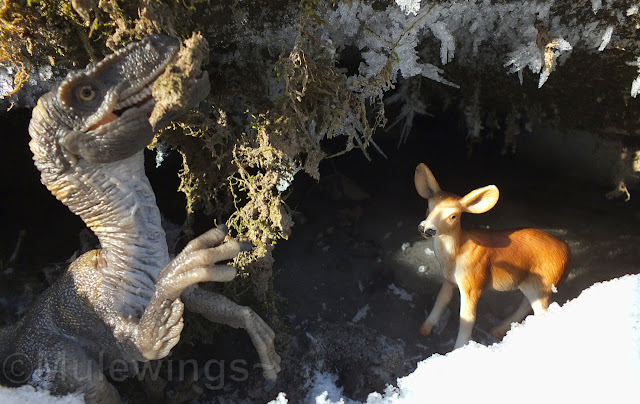 Doe noticed that Dino had some very big teeth, but he was very polite and ate the moss with her at the sunny ice cave. Doe liked her new friend and couldn't wait to introduce him to Bo and Stinky.
She wondered what her pony friends would think of him too?

We can only assume that Doe's complete lack of fear and total innocence can work in her favor.  How often does one meet a Velociraptor and 'do' lunch?