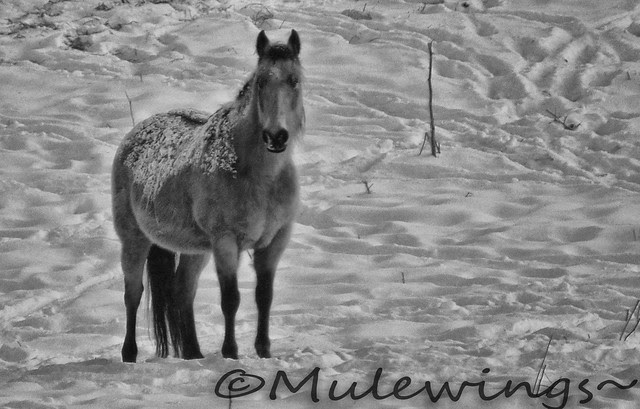 I've written about it before.
This morning revealed that a light snow had fallen overnight.  The 'girls' in the 'mare' pasture [which consists of 3 mares and 4 molly mules] began to line up for the morning sunlight that was peeking over the tree tops and dipping into the valley.
The girls kept jockeying for the 'best' position to get full sunlight.
A mare would move and push a mule.  The mule would comply and then try to push another mule.

Eventually they were all lined up along side the electric fence, dozing quietly until the Boss Mare came along and re-ordered the herd.  It was rather fun to watch this ordering around with a flick of a tail or a nod of the head.  Horses and mules do not need to speak.  The tell all with their body language.

Perhaps the most entertainment of the morning was what occurred in Badger's pen.  I had moved Opal in with Badger at the beginning of winter so that Badger would have company and I could continue working with Opal.
A few days ago, we put Fred, my husband's pony mule in with them.  Fred is an older mule who is 'catching impaired'.

Badger seemed to develop a certain interest in Opal that he didn't have before.  He spent most of the first day trying to keep Fred from getting near Opal.
This morning Opal was using Badger to stay away from Fred.

These two, Fred and Opal have a love hate relationship.  When we've put them together before they always seem to fight.
Take one of them out of the paddock and the one left screams and cries.

This morning Badger was in the middle.  Fred would shake his head and try and nibble at Opal.  Opal would spin, buck, and turn and run behind Badger...who in turn would lay his ears back and look ugly at both Opal and Fred...not sure who to blame for the interruption to his sunning.

One thing for sure, the two elderly mules are keeping Badger in condition.  Lots of movement during certain parts of the day.
Although right now it seems as if all the equine are enjoying the bright sunshine.

Fred is napping, his nose stuck into the snow.  Badger is off sleeping by the water tank.  Opal is sunning herself by the gate.

In the 'girl' pasture everyone else is doing the same.  Each mare has a one or two mules standing with them.