After a morning of phone calls from Gundersen, emails to Rich's PCP doctor at the VA, and a visit to the nursing home along with PT for Rich, a heart monitor reading and lunch out....

We finally got home around 3pm.
Rich needed a nap.
I needed something, but wasn't sure what that something was. I think I needed a distraction of sorts from all the busy-ness, or busy mess, as I call it.

My neighbor came down with her daughter and we talked about scheduling our septic pumping/inspection for the same time and how each of our schedules were crazy busy. I suggested we shoot for a time that the guy could do both places at once and between the two of us, we'd manage to have at least one supervising 'adult' around.

As we walked back along the driveway, I asked Allie if she'd like to go looking for bugs.
After all the crazyness of the day, I felt like a break of sorts. 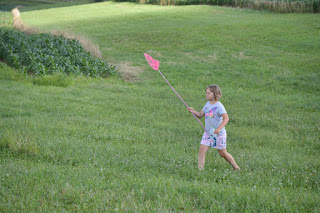 Armed with her pink net and bug box assortment, we headed off.

We found an alarming amount of Japanese Beetles everywhere. They were decimating the wild grapes along with some other plants that I'm not that fond of, like a burdock.
Allie captured several and put them in a vial. We noted that they 'pooped' a lot. 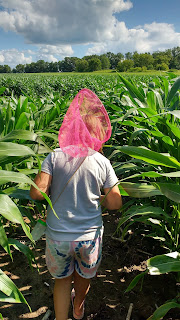 Allie thought there might be some interesting insects in between a row of field corn.

Actually we did find something interesting. Some Bug Drama. One insect eating another one. 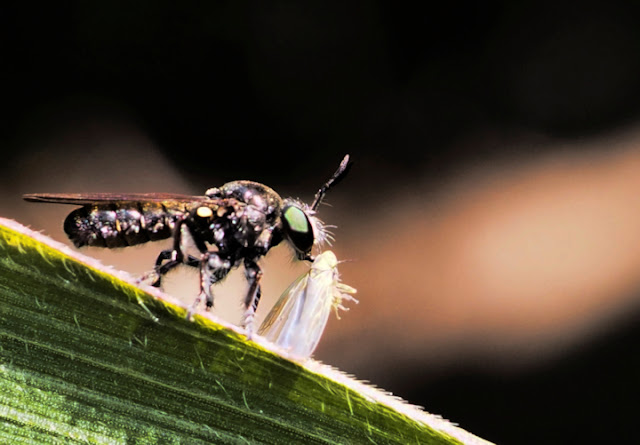 I had my Olympus camera with me and the macro lens on it. I put it to good use. I can say that these insects were very very tiny!

We came through the short row of corn and found a fairly large area of milkweeds that were full of action. 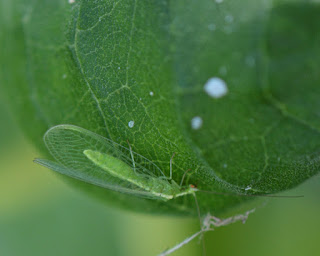 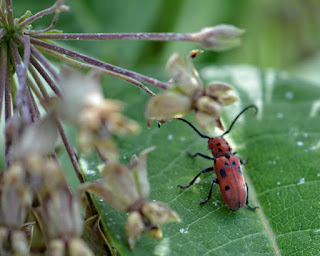 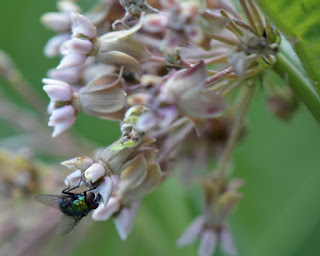 The monarchs were too swift for me to catch a shot of. I'll have to go back in a field and sit still with a long lens for that.

We hiked the large hay field and Allie ran trying to scoop up insects with her net. She did get a couple of white moth like insects and it was a dual effort to get them into her 'bug' box.

Allie chatted the whole time about bugs. She loves insects.

I don't know how long we were out there walking around, but I do know that it was such a welcome break from all the other 'stuff' going on.

And I know we both enjoyed it. I got some wonderful macro photos and Allie got some neat insects for her collection.
Posted by Val Ewing at 6:20 AM
Labels: breaks, Bug hunting, bugs, fields, fly, fun, green lacewing, macro photography, Miss Allie, moth, walk