Really.
It was not Wild nor was it really Wicked.

First order of the day was to go get a truckload of hay. Rich said he wasn't going with because his knee is swelled up again and it hurts.
It has been drained twice now and both times the aspiration has revealed blood.

The VA orthopedic department did make an appointment for him on December 4th.
The lady who made the appointment said that we should visit the ED if it was too painful or bothersome before that date.

When a joint fills up with blood it will severely damage that joint. Rich says leave it until his appointment, but I'll drag him over to the ED [ER] tomorrow after seeing Oncology for a follow up. He is in a LOT of pain. I'd like to also find out why the joint keeps filling up with blood.

So, off I went with the pickup and got our monthly supply of small bales of hay. I paid Eddie for the pig we purchased from him. His wife made coffee and I sat down in their kitchen and visited for a bit. 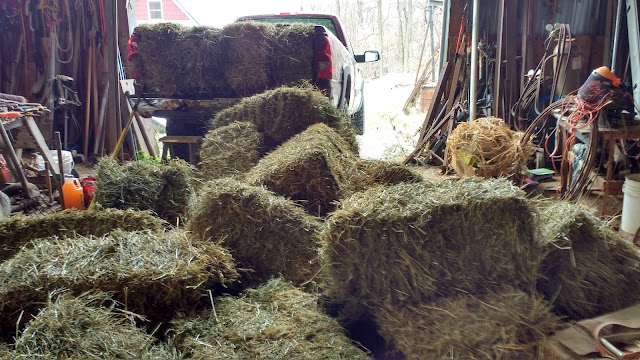 As you can tell from this photo, I'm not really great at just backing into a crowded shed to get close to the spot where we stack our small bales.
I got the truck into the doorway and left it there.
This way I get to move it at least twice by hand!
Once to toss it off the truck and once to stack it.

I will consider it a CrossFit workout...WOD: Move bales and toss them!

I did get it all taken care of and it went slightly better than I expected. Maybe it is that CrossFit training I've been doing. Maybe it was the cold temperatures that made it more comfortable.

Rich and I have been playing Backgammon for Speech Therapy work. He has to use strategy and counting.
I saw how much he enjoyed playing cribbage with our friends from Kenosha.
So I asked him if he'd teach me.

Cribbage is as clear as mud. 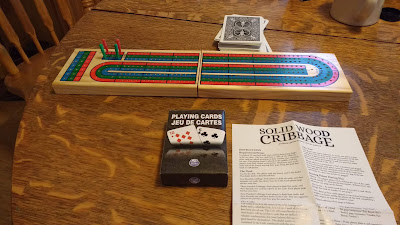 But since Rich loves the game so much, I decided I need to try and learn it. There is a method to my madness. As he tries to teach it to me, he works on his communication skills, words, thought process, and counting. IF I play, he promises to do a bit of writing therapy also.

Even when Rich's words don't come out correctly, they are generally close enough that I understand what he is trying to say. Sometimes it is an exact opposite and sometimes it is just a strange new word combination.

So he started by trying to teach me to count.

It made absolutely NO sense to me so I suggested we bring out the board and he help me play the game until it clicked.

Patience has never been a strong suit of my husband's. So we played and I could see he was getting frustrated that I 'wasn't' catching on right away. However we played until it was nearly dark outside...moving the pegs in a manner that almost made sense and counting in strange and odd ways.

I suggested we take a break while I did chores and made supper.

After supper Rich went back to watching Netflix and I pulled out some paints and chunks of leftover wood. I wanted to see if I could make crackled paint with Elmer's Glue. I wanted to experiment with glue on glass. 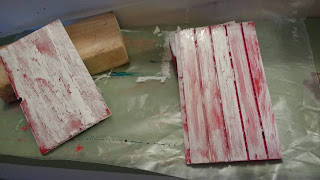 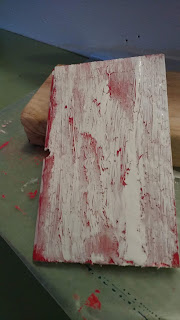 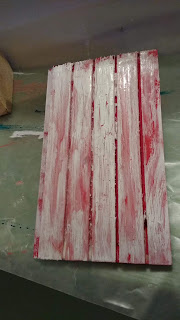 I always like to experiment on small things before trying something else. I saw a video on Modge Podge and paint crackling that may be fun to try...with napkins? I don't know.
I also did a dirty acrylic paint pour, which is drying in the basement.

I'm trying to figure out how I will decorate this year for the Christmas-Winter season. Time to gather new sticks and grasses to make bouquets.

I see light fluffy flakes coming down outside. This monday morning is very grey. The Juncos -- Grandma called them Snow Buntings, are busy in my flower bed.

Time to get my new week going.

Maybe I'll have a wild Monday?