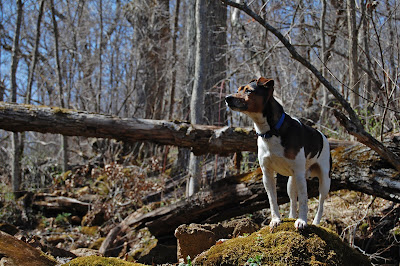 April 22...
After getting off an all night shift, I decided to take a quick nap and then go for a 'photography' hike.
This is the most relaxing thing I can think of doing.
Morris starts to quiver and shake when I pick up any of my cameras. It is a sign for him that there is more than likely going to be some sort of great adventure~~~

along with icky yucky things to roll in and sample.


We found some Virgina Spring Beauties...

We found some Wild Leeks [which I picked some! yum] 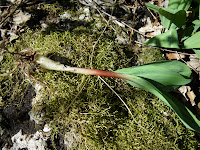 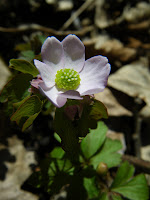 And then a opossum! Morris discovered the critter. 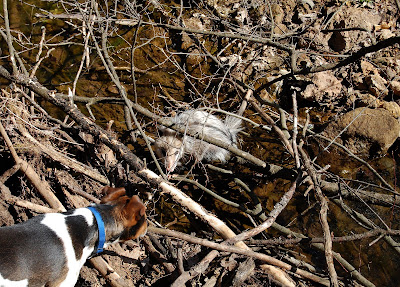 I was busy on the hillside looking at the first leaves of wild columbine and enjoying the songs of a cardinal above me.
Morris wouldn't come to me when I called.
So I walked down to see what was so interesting to him.

A sickly hissing possum. Morris was quivering, though I think NOT from bravery. I was happy that he is not a normal Jack Russell for a normal JRT would have dove in for a fight.

No, Morris is a kind and gentle JRT. He prefers non-violence. He'll run from squirrels and bark at rabbits.
The possum was very intimidating as it was his size. True to being Morris~~
he just watched, curious.

Now before anyone jumps on me, for shooting this possum, let me say:

They are not cute.
They are not friendly.
They will go away on their own...
But they carry EPM ~ Equine Protozoal Myeloencephalitis
a disease that is really quite deadly to equine...

They are nocturnal animals and do not come out during the day.
They are carries of many diseases, along with carrying heavy infestations of fleas, ticks, mites, and lice.
In other words, a 'possum' is a big rat.

Perhaps I should be politically correct in saying that I helped this possum cross the rainbow bridge before his time.

Anyway. We did go on our way after disposing of the growling sickly thing. I felt I'd done it a kindness as it was obviously ill.

We finished up our hike by finding a deer antler shed, which I carried home along with another fine day in the woods, enjoying the outdoors.
Posted by Val Ewing at 9:40 AM