The day of the Dozer

Our driveway was a getting washed out, and the culverts were plugged. Both my husband and neighbor had done some repair work to it over the past.
Farm Friend came with his bulldozer and started work on the driveway. He smoothed it out, reshaped it and fixed the 'water run offs' for us. 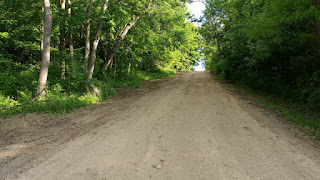 He arranged to have the gravel trucks show up and ... the next morning at 7 AM I had gravel being dumped! 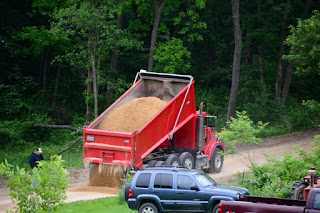 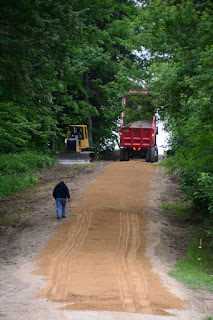 This is just the hill section of the driveway, but even before the new gravel, I think it was looking so much better! 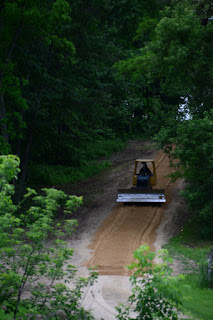 Jeff is a master at dozing. He worked many years for our county doing bulldozing, grading, and of course snow removal. He is retired now and farming with his son full time and 'Dozing' part time.

He repaired our driveway in 2007 and I'd say it has lasted a very long time. He also made a trail through our woods and a crossing in our creek bottom that washed out completely in 2016.
He asked if we needed a touch up of the trail. Yes on the other side of the creek the trail had become over grown and trees had fallen down. 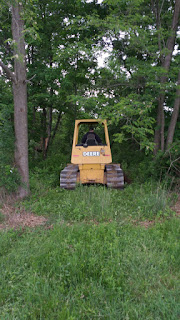 This doesn't look like much, but the old ridge 'road' was getting filled up with obstacles. It was fine in the winter and spring but it was becoming more like a deer trail.
Looks like I need to start spreading grass seed. 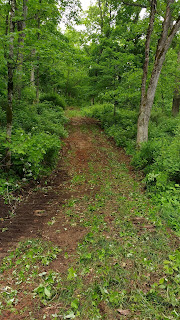 Then I trotted down and watched him work his magic machine in the bottom.

Here Jeff considers the best way to move earth and rebuild the crossing so we can use the 4 wheeler to get to the back of the property and even the skid steer if need be.
Our Kenosha pals would like to hunt out 'back' and last year there would have been no way they could have brought a deer back up through and over the 10 foot bank.

In our area we have steep hills and valleys. So our land seems to be in a constant state of change depending on Mother Nature.
Jeff considers the way the water will flow during a large storm and rebuilds to avoid that if at all possible. 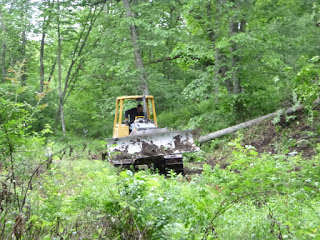 Then he makes the 'ramp' down into the creek. 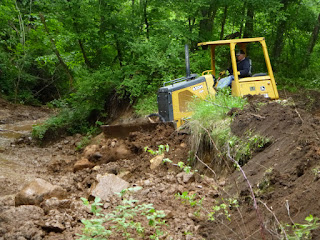 I actually think he loves doing this work the best. He can be creative ... and he can play with trees and rocks. Sort of like a HUGE sandbox.
I sort of said that to him and he smiled from ear to ear... 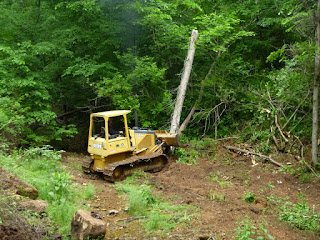 After he finished the crossing he touched up the 'back' trail and knocked down two huge box elder trees for me. They were dead and leaning towards our nice shed. We'd worried that Rich wouldn't be able to cut them without them falling onto the shed.
Another worry was that a windstorm would topple them onto our shed.

Now they are laying in one of the little pastures to be cut up and burned.

Jeff finished up and then offered to reshape the west side of the yard where a huge pile of sand and rock sit right now. I would have said go ahead but I know that Rich really wants to do it.
We decided to leave it for now and if Rich couldn't do it with the skid steer, we'd re-address that issue next year.

I took a lot of video of Jeff working his magic, but since it only really was interesting to myself and Rich, I won't bore you with it.

I hope to get down to the creek and see what it looks like this afternoon.