Friday afternoon the K-town gang arrived. Scout and the kids piled out of the Subaru and hugs were shared by all.
Morris and Scout nosed each other and then trotted off to make their marks in the yard.

I watched in amazement as they began to unpack. I'd cleared the counter in the corner of the kitchen for what I've dubbed as the 'Clausen Corner'. It seemed as though I may have to expand the corner as they'd brought a ton of bread and food.

Eventually everything that was supposed to come in had been deposited in place. By now we'd gotten into a routine. The girls knew exactly where to set their things. They changed into outdoor clothes and ran outside to enjoy what was left of the daylight and the last day for the ... next 9 days of Gun Deer Season/Thanksgiving Week.

It was rather nice outside so the 'Men Folk' visited while the 'Women Folk' visited. The guys started talking about strategy and hunting. The purpose of the trip was to get meat for the family. Of course the guys talked about all the monster bucks I'd captured on the trail camera.

I laughed and said something to the effect that "They will all be in hiding from pre dawn until the sunsets on the last day of hunting season."
I got looks from the 'Men Folk'.  Earlier this week I'd seen about 10 nice bucks on my walk with Dixie through the woods.

This photo got the 'Men Folk' pretty excited though...
I couldn't blame them. This buck is in direct line with the Clausen Deer Stand. 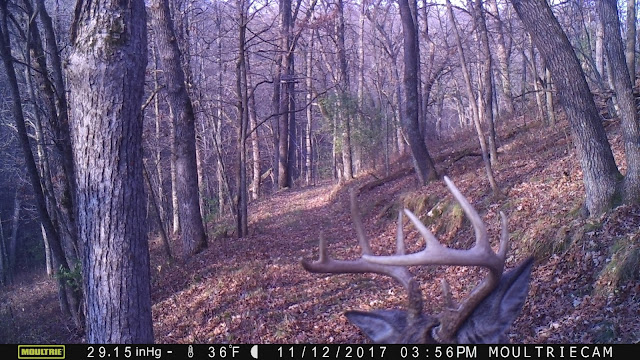 Of course I'd gotten shots of others too. 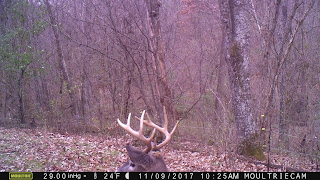 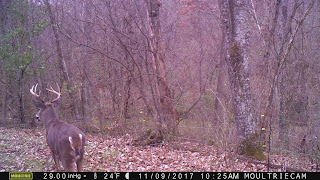 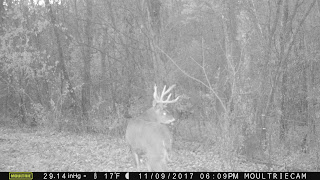 These shots caused 'buck fever' for all of those who happened to see them.

Over supper we all talked about deer, bucks, hunting, and the weather. There was a feeling of anticipation in the air.

Everyone went to bed early. It would be a predawn morning.

These guys were staying put in the stand once they got there. I smiled as I poured coffee and the hunters whispered getting ready.
I loved the electricity that zapped unseen through the house as they dressed. I never go out on opening morning.
I'm the farm caretaker for this day each year.

My job is to make sure that the hunters have something to eat and a place to warm themselves when they come in from the woods. Over the years we've only had a few folks come and hunt. My brother in law did a few times, and Rich's daughter did too. Other than that, it has always just been Rich.
This year however our friends from the east side of the state said they'd hunt with Rich and help out. Plus they were looking to fill their freezer with venison.

I have to say that last year's harvest provided us with months of very good eating. Deer Harvest feeds people.

Daryl and Amanda slid out the door quietly and headed to the woods. The Hunt was about to begin.
I poured a cup of coffee and sat down to enjoy some quiet before dawn.