Nag...nag...nag.
"It's foggy as pea soup Charlie, nothing out there to really see."

Charlie went back to the door and bounced up and down. He made his funny little grunty whining noises. Odd to get used to his type of communication after so many years of Morris's very direct demands.

Charlie didn't understand the Fine...or the "Wait a doggone minute."

I grabbed my camera bag and tossed it over my shoulder. I opened the door and Charlie went out on the porch and turned around. As if to say, "Hurry up."

I grabbed his little black cord and attached it to his collar. Charlie took off at a bouncy run for about 40 feet and then stopped to see if I was coming. 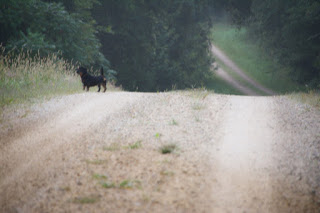 I started out towards the neighbor's place on the ridge and Charlie charged ahead. 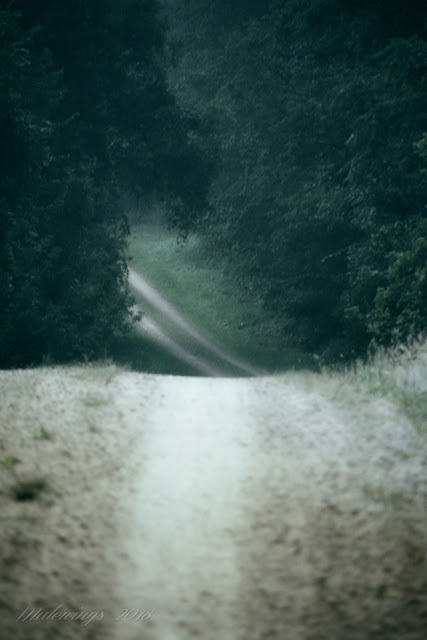 From a certain spot on the ridge the perspective of the road gets interesting.

I took the shot with the fog coming in and called out to Charlie.
He came on the run. I swear he was smiling.

We headed out to the corner to 'see' what we could see. The fog wasn't too bad and perhaps we'd be able to see the sun come up through it.

Then things quickly got foggier. 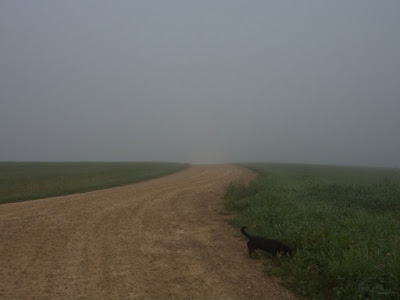 It was like the world past 100 feet had disappeared into grey matter.

"Charlie!" I called to him. He trotted back to me and I glanced towards home to see how foggy that was.
When....

out of the fog we got a visitor... 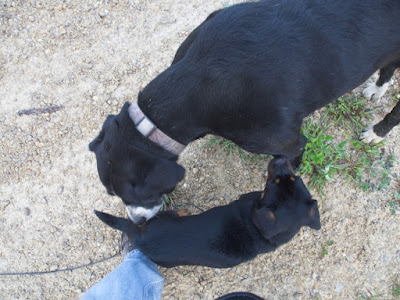 One of the neighborhood dogs. We call him the Nagel Dog. He wandered onto the Nagel farm one day years ago and has stayed ever since. He can often be found trotting down the gravel road. He is never aggressive or a nuisance. He is quite aged and very friendly.

He and Charlie gave each other a once over.

Then Nagel Dog disappeared into the mist.
Charlie would have followed except I said "NO!" and stepped on his cord.

I turned and headed towards home. Charlie trotted in front and stopped to smell interesting things on the side of the road. The fog just seemed to creep in heavier.

By the time we got to the mailbox, it was very thick. 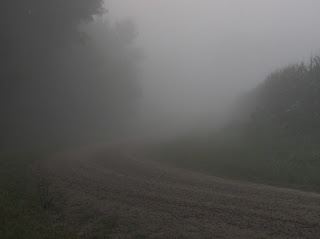 The only sounds were those of my chore boots crunching on the gravel as I headed down the long driveway towards home.

Charlie was wet, Charlie was happy.
After I toweled him off, he jumped up on the couch and went to sleep.

Our day had officially begun.