I've had this mule for a while. So the purpose of taking her to the round pen first few times are to learn a bit more about her actions when separated from the rest of her pals.

I stood in the pasture with a halter and lead rope. Sundance spotted me and walked up quietly. I just scratched her ears and rubbed her neck a bit before haltering her. 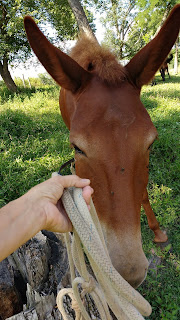 I took her out the 3 line electric gate. This was something she had done a few times before but I wanted to see how she'd do with the the distractions of the other mules and of the two donkeys on each side of the lane.

She watched everything calmly and stared intently at the hot wires I'd dropped on the ground. They snapped and she respected them but didn't freak out. I held her rope and put the gates back up. She softly snorted and again watched with great interest.

Maybe she was trying to figure out how to move gates on her own?

We walked down the lane to the shed and she looked around. She'd never walked this way before so the piles of metal that my husband had stacked in the weeds were new images for her to process. She did and decided they were nothing of great concern.

I walked with her into the round pen. We did the customary warm up and a bit of lunging. I will see many trainers lunge their animals over and over and over again. A smart mule doesn't see the point in the lunging. If the mule is friendly he/she would rather just spend time close to the trainer and only move off if made to.

Sundance did a few laps and then stopped at the gate which I expected. I snapped the lunge whip and she gave me a curious glance as if to say..."So? I know you won't hurt me. I have no fear of you." 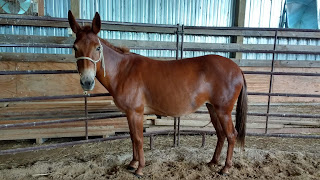 So I decided to make that an uncomfortable place to stop. I grabbed the old beat up plastic sled and tossed it in front of the gate.

SNORT! It was some sort of monster.

We worked on trust after a few minutes of lunging.

Oh that blanket! It was a killer blanket again. She scrunched up her back each time I approached her with it and trotted off.
I didn't punish her for it or make her run around the pen. I waited until she stopped and then approached again.

After 3 tries, the blanket was on and she sighed.

The point is trust. I want Sundance to trust me not to put her in danger. I want her to accept what I do with her. I want her to think about it. I could hurry her training along by saddling her and letting her buck it out and lunge the crap out of her, but that is not my way.

I tossed another old blanket into the round pen. It too was some sort of strange mule eating monster. Sundance avoided it as she walked and trotted around the round pen.
So I moved it. 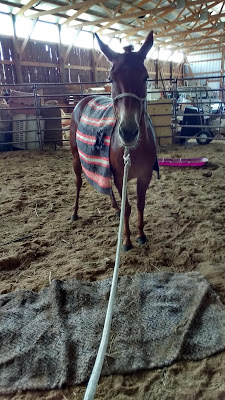 Here I ask without any words, "Sundance do you trust me?"

I ask her to step forward onto the killer blanket. Note the sled behind her which is no longer a purple mule eating sled. 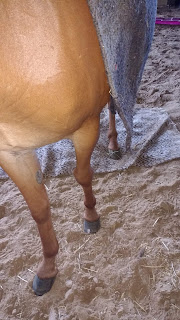 Apparently, the blanket wouldn't kill her. I could lead her over it. Her concentration was on me and not the blanket.

I took this moment to work with her feet. She picked each foot up for me and let me pick them out. 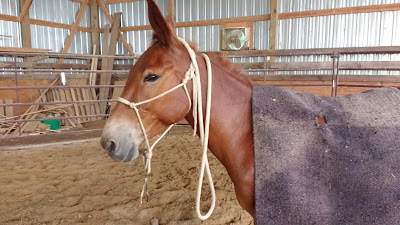 I added my version of 'Rope Games' and Sundance seemed totally unconcerned.

One of the particular things I've noticed about her is that if Sundance has a new item introduced on her body, she plays statue until she figures things out.

Here she stands with the rope draped over and between her ears. She is thinking about it. She let me put the rope on her like a girth and just stood still with her ears flickering back and forth.

School Day 2 was over.

I left the pen and we walked out into the yard and around another lane back to her pals.

No excitement here. But it was interesting to observe her reaction to new items.