I got company by Morris

I just know that all kids belong to me. The big people are okay, but I like little people the best.
And sometimes they even bring a dog for me to fuss over.
Well. Sometimes I snarl and try and put the young dog in its place. I usually end up in my crate for that.

So the house was cleaned up and fresh sheets were put on the beds. Even the new funny looking bed was all tidied up. 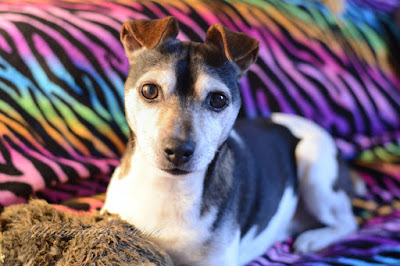 I like the bed cover, it is fuzzy and just right for me to lay on.

Pretty soon I heard her leave and then heard two cars come. Oh I was ecstatic! Car noises meant people. People meant new laps to try out and faces to lick if I could manage it.

Imagine my horror when this black fuzzy dog walked in with the young people.
Oh. NO!
My house. Ugh. Young dog came up to me and we sniffed noses.

"I'm Morris. I rule this house. Your people are now my people. Your young people now belong to me." Well really, I had to straighten him out right off the bat and give him the rules.

"Oh boy, oh boy Hi! HI! Oh hello. Did you say something? Can I sniff you all over. You have a short tail and almost no ears! Oh boy, want to wrestle and play? I can jump right over you! The people call me Scout. Wanna play? Huh? Huh?"

I was crestfallen. Another young dog. Why couldn't people visit with an ancient old codger dog that doesn't move. Or better yet. Just ...sigh.

"No. I rule the house. I am top dog." I tried to reason with Scout.

"Okay! Boy that is nice! What is a Top Dog! You look like a little baby dog! Wanna sniff each other?" With that Scout stuck his nose on my hind end.

I lost all of my manners and snarled. Immediately I was scooped up and put in my crate. Scout went to bed in his crate too. Upstairs with the very nice young people. I was heartbroken. I wanted to claim them as my own.

However the next morning Scout and I were let outside together. We ran hard up and down the yard before we went with the visiting people on a hike.

"Come Scout. Let me show you cool stuff." Dang the dog was gullible. I thought I'd make his people freak out.

"Oh what Morris? What is cool?"

I pointed. "That! Take some bites of those pies, very good." I winked at him.

His people started yelling..."Scout no!"
And I waited for it...wait. "Wait!" I told Scout.

Shouts of "ICKY!" Came out of all the people mouths.
I winked at Scout. "I told you buddy. Eat some cow pie and the people go nuts!"

I showed Scout where to find some 'Smart Pellets' and he thanked me profusely. Of course I think She just laughed and Scout's people were a bit grossed out.

Scout is a bit weird, but he said he is part water dog. He played and ran in the creek, biting the water and going after sticks that his people tossed into it. After a while we decided we were so tired out that we just walked along and kept an eye on the people. 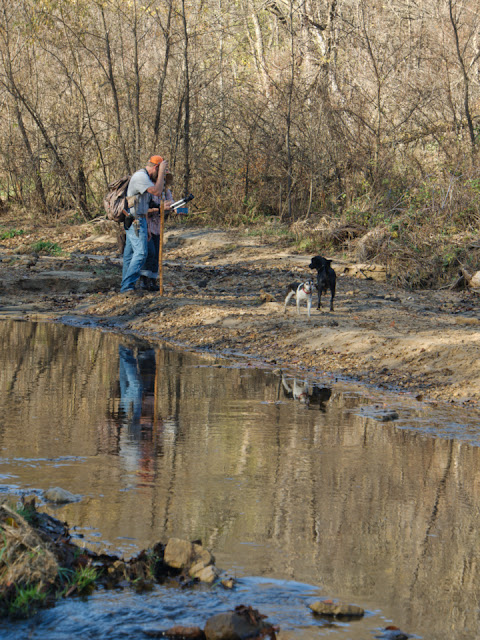 "You know the way back to the house, Morris? Because there is food at the house and I am getting hungry."

"Yes Scout. I am Morris. I am an older dog. I know just about everything there is to know."

"Wow. Can I come and play with you more often?"

I didn't give him an answer right away because I wasn't sure that I wanted to share his youngun's with him. 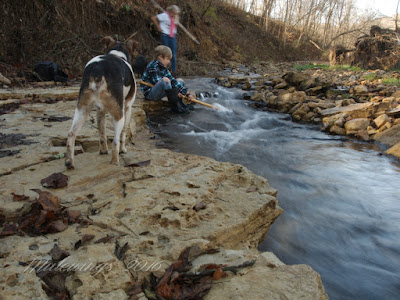 Eventually we decided it was best to get along.
He is a youngun' himself and after all, we had all of these people to look after.
Maybe it would be nice to have a younger dog to help keep track of these people.

And I am sure they thought they were keeping track of us. 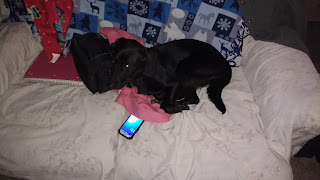 I'm sorta guessing that what they don't know, won't harm them too much. I was pretty impressed. Scout showed me how to use a Smart Phone.
I hope he comes back.
I don't even mind sharing my couch with him. 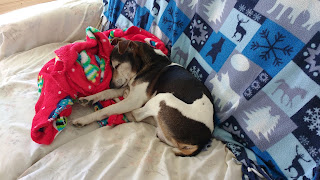 Okay. I do mind. But not as long as I get the little bed upstairs.