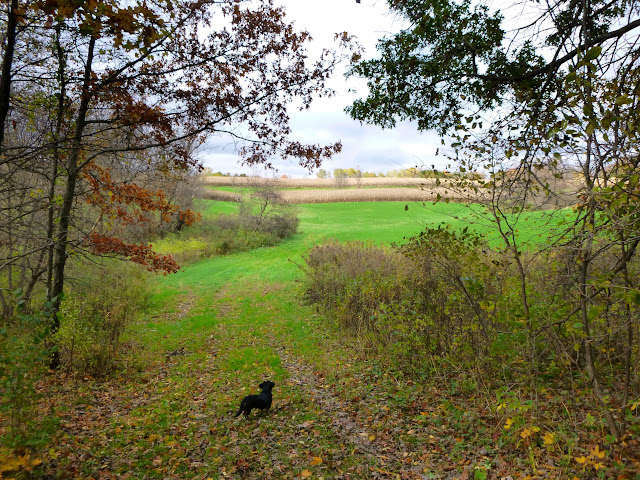 Thursday afternoon I gathered a few items together and stuck them in a backpack. My goal had been to get back to the Kickapoo Valley Reserve for working on some of those trails in the Trail Challenge. I'd given up hope on completing that after my MIL's hospitalization, rehab, and return to her apartment.

Between her and Rich I had nearly a full time job going on and had no real breaks other than walks around the farm with Charlie and Dixie.

Charlie started to eye me carefully as I put some trail mix into a snack bag and a few tiny dog treats. When I put on my gun belt and old coveralls he perked up his ears. I was under Charlie watch.

Even with the set back in the Trail Challenge, I didn't want to lose the strength in my legs from ... not hiking. Besides, it is so convenient to just walk out the door and go when you are surrounded by woods with little obscure trails. Hiking in cooler temperatures is just more pleasant.

"Where are you off to?" asked my husband. He was watching Netflix, sitting in the folding metal chair right next to the flat screen and the old computer that is hooked up to screen.

We'd finished up with his Telehealth appointment and he said he'd watch a show and then take his meds and a nap. He decided that it was too cold, muddy, windy, to take his walk... And.
I am not allowed to nag him, only ask once and then let it be. However I do repeat asking if he forgets his medication.

"Where are we off to?"
I looked down at Charlie.
"Adventure!" I said.
Normally I have a route planned out for one of our little walks, but this time I didn't.
"Adventure?"

"Yes, Charlie and I are going and I'm not exactly sure, but we may go the the Back Valley."  There, at least I did have an idea of a goal.

"Okay." My husband frowns and looks at Charlie. "Think he can make that hike?"

I check my .22 pistol and decide that it really does need a good cleaning again. I check the safety and put it in the holster.

Charlie and I depart and head up the trail that the bulldozer man had made for us. Down into the creek we go, cross it and head up the other steep hillside.
Charlie is happy. His nose is working overtime and he darts back and forth, then runs ahead and stops to check on me. 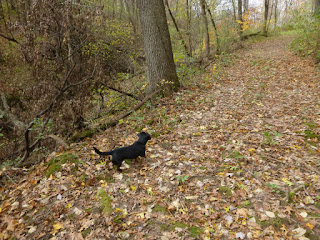 I haven't brought my DSLR camera. This is a hike, not a photo journey, though often I do combine the two. I just wanted to hike. The route I sort of had in mind would be about 3 miles with several steep hills.

We come out of the woods and skirt along some cropland. There are some guys who come out and hunt this area. I find a tree stand on the fence line to our property and it annoys me as it is set up to point into my wooded area. I sigh and move on. I find another one perched on my neighbor's fenceline along the snowmobile trail along with a trail camera. I've cut across about 30 feet of this other person's land and get caught on the camera.
I stop and wave at the camera and then move on. [This is the only person in our area that has not been a very good neighbor...he doesn't live on the cropland but considers it and anything around his fence to be 'his'. I'm sure we all know folks like that.]

Charlie is happy to bounce and run along the deer trail on the snow mobile trail. He dodges the tall grass and stops to the smell scat of every critter that has passed through. 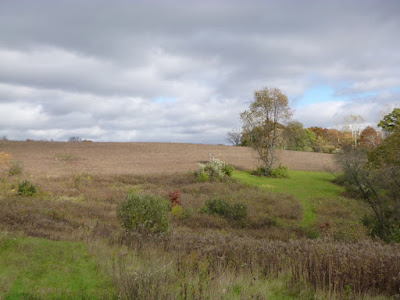 Charlie and I cross the ridge and stay alongside the woods, the wind is cold but refreshing. We dip down on an old obscure logging trail that hasn't been used in 13 years. This is one of those places that opens up into an old forest stand that is not been over run with brush. 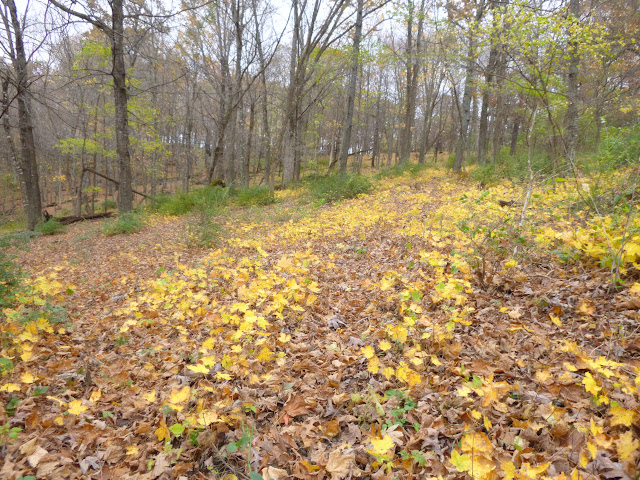 Those spots of yellow are not leaves from the trees above, but thousands of seedling trees sprouting up.

We head down the hill towards the stream in the back valley when we hear sirens. The highway is about 3/4 of a mile below us and the way the land lies in the spot we were in...the highway sounds echo up between the hills.
Charlie stops and puts his paws on my leg. I find a log and sit down so he can sit in my lap.

He scrambles up and listens to the sirens with me. 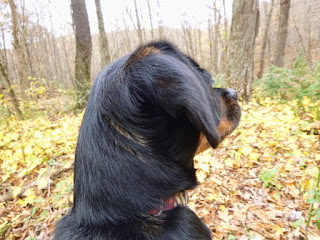 As the sirens start to fade, another eerie sound bounces off the hillsides. This sound makes me feel a bit chilled.

Coyotes voices drift up to us from below. It sounds as though dozens of them are calling and sounding off for a hunt. Charlie shivers and looks at me. I check my pistol and it is there. The sounds of those voices chill me too.
During the coyote mating season, I don't walk with any dogs as the 'yotes tend to be territorial and I've had two dogs stalked while I've hiked with them in years past.


Eventually they quiet down and I set off with Charlie again, though I've changed our route. We won't go into the back valley we will stay above it. I walk with Charlie's cord in my hand and he goes back to smelling everything he can.

[It dawns on me a bit later that the coyote howling was probably in response to the sirens from the emergency vehicles.]

I finally stop at the place I refer to as the Overlook. It is a point of land that overlooks the valley. It is a rock outcropping high above the valley. I sit on a log and we have our snacks. Charlie has forgotten the eerie noises and is enchanted by having a dog treat way out in the woods. 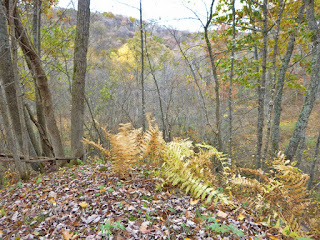 The drop off is just beyond those ferns. The trees to the left hang on rocks.

We spend a bit of time just sitting there and enjoying the sounds of the woods around us.

I keep a hand on Charlie's cord as we negotiate the deer trails and climb past The Ice Cave. I can see that something has used the structure to eat small animals. Little piles of fur are matted against the sandstone bottom.

We climb out of the woods and hike through the tall grasses. Charlie leaps and jumps and I finally drop the cord and follow him. I decide to take a different way home and we go through another steep rocky dry run. 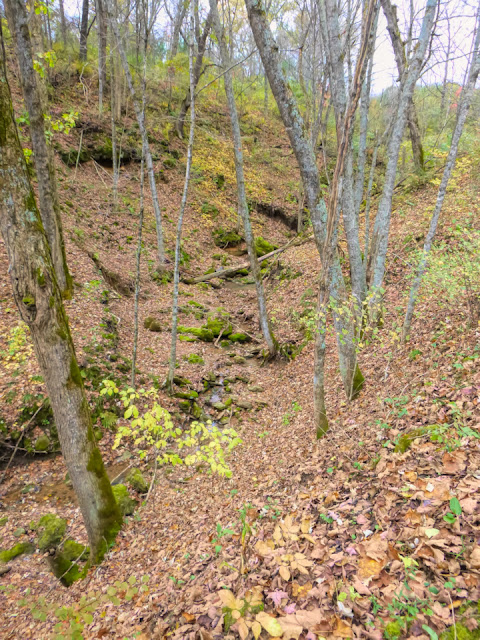 We get to the creek that leads back to our property but I decide to cross it instead of following it back to our bulldozed trail.

The water is up with all the rain we've had. The ground is so saturated that any amount of rain is cause for a flash flood.
Charlie charges through the cold water. 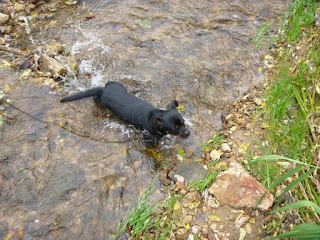 I want to see how the snowshoe trail I have used over the years faired over the summer and all of the wind storms...

The trail is still there but several trees have come down and I have to reroute through berry briers and multiflora rose.
I'll have to use the machete to clear a few areas or just use the trail that the 4 wheelers had left.

We come to the Merry Meadow where our 'herd' used to graze until November. It is overgrown now but we use an old cow/horse/mule/donkey/deer trail to hike back to our gate.

Charlie runs willy nilly, bouncing along in only a way he can do it.

When we get to the house he greets Rich with enthusiasm after I towel him off and remove his cord.
He promptly jumps on the couch and falls asleep.

Someone told me I had a Froufrou doggy.
I don't think so. I think he believes he is just a tough little hound.